Janelle Monáe’s new album The Electric Lady isn’t due out until the fall, but we get a sneak peek at what’s to come with her new video, “Q.U.E.E.N.” 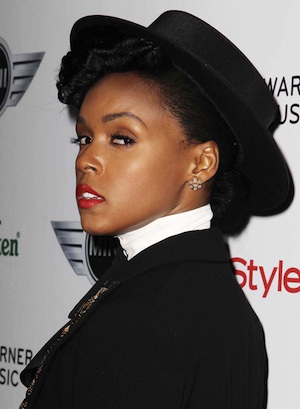 Janelle Monáe grew up with an eye for the dramatic. She attended performing arts schools and is known for her signature tuxedo and perfectly coiffed pompadour.

And when it came to her solo career, the creative Monáe decided she was going to do it her way — by inventing an android alter-ego who was at the center of her 2010 studio album, The ArchAndroid.

Well, the android is back with “Q.U.E.E.N.,” the first single from her upcoming album The Electric Lady.

In the video for “Q.U.E.E.N.,” it’s the future. Janelle Monáe and her band have been captured in suspended animation for being a “time-traveling rebel.” Also captured at the futuristic “Living Museum,” is Erykah Badu aka “her dangerous accomplice Badoula Oblangata.”

Erykah Badu sees red over video with The Flaming Lips >>

What follows is a revolution of awesome with Monáe and Badu fighting stuffy stereotypes and sexual mores with neo soul and one very fluffy standard poodle. Monáe throws shade right back to the haters who judge her style. She’s here to have fun, break down barriers, and isn’t ashamed to tell the world.

At its core, “Q.U.E.E.N.” is an empowerment anthem with Monáe singing, “even if it makes others uncomfortable, I wanna love who I am.”

Toward the end of the song, Monáe shows she not only has the voice, but she can flow with the best of them by rapping about inequality and the need to stand up for your rights.

The song ends with a call to action to like-minded ladies: “We rising up now… Will you be electric sheep? Electric ladies, will you sleep? Or will you preach?”

Preach on, Janelle. We’re with you.

Janelle Monáe’s new video for her single “Q.U.E.E.N.” Let us know what you think in the comments below.