Kanye West took time out of his Met Gala performance to tell his girlfriend, Kim Kardashian, that she’s “awesome.” 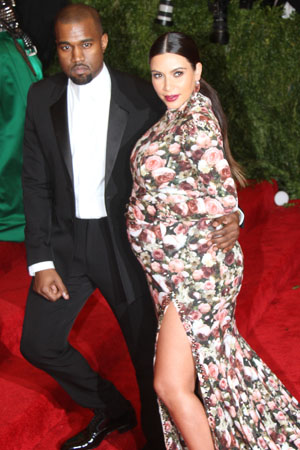 Kim Kardashian might have been nervous to show up at the 2013 Met Gala on Monday night. Lucky for her, boyfriend Kanye West had her back.

“Kanye telling Kim not to worry what anyone says that she’s awesome. Quite touching really,” model Coco Rocha wrote on the Vine she posted of West’s performance.

Kardashian made her first appearance at the annual event — a year after Vogue‘s Anna Wintour reportedly banned her from attending 2012’s gala.

“Anna hates Kim,” a source told RadarOnline in 2012. “Why would she be invited to the event? It is all the biggest stars in the world and Kim doesn’t fit that bill at all.”

But it seems like the two have buried the hatchet: West and Kardashian were spotted heading to dinner at Wintour’s Manhattan home on Sunday night.

Oh, what we wouldn’t give to be a fly on the wall at that dinner party.

The Kardashian clan’s nanny tells all in her new book >>

“I love fashion and I really am excited to see everyone’s take on punk,” the reality star told Vogue.com of this year’s Punk: Chaos to Couture theme. “I know it’s different for everybody… everyone has their own take on it, so it will be really interesting to me to see what the designers and everyone else thinks about punk.”

“I think mine and Riccardo’s version of punk for me is probably not the mohawk typical punk that you would really envision,” she added.