Alec Baldwin is going to have plenty of time to get ready for baby. On Monday, producers of his Broadway play, Orphans, announced the early closing of the show. 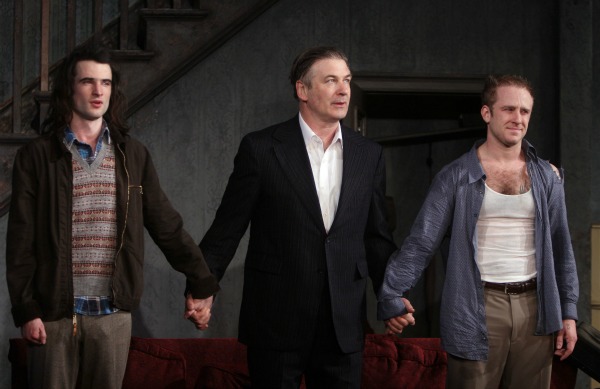 Actor Alec Baldwin is going to have a bit of free time on his hands this spring. Not only has his TV show 30 Rock ended its seven-season run, but his Broadway play Orphans is closing unexpectedly early.

The show has been doomed from the start after a feud between Baldwin and original star Shia LaBeouf erupted over what producers called “creative differences.” However, the two stars took to social media to hash out their beef with each other.

While their differences were never resolved, LaBeouf did come to see the show to support Baldwin and his replacement, Ben Foster.

Orphans, by playwright Lyle Kessler, is about two orphaned brothers who take a wealthy man hostage. Baldwin plays the rich man in the show. The play was first staged on the Great White Way in 1983.

The producers were hoping for more Tony nominations than the two they received. One was for Best Revival of a Play while the other is for Lead Actor for Tom Sturridge. Baldwin was snubbed by the Tony committee and that spells doom at the box office if there aren’t enough nominations to draw an audience.

The show was originally supposed to run as a limited engagement through June 30 at the Gerald Schoenfeld Theatre in New York. It will now close on May 19 after just 64 performances and before the Tony Awards show on June 9.

Ireland Baldwin: “I am not my parents” >>

The closing will almost certainly affect the play’s chances to win a Tony Award as well.

It’s not all bad news for the Emmy winner though; he is expecting a baby girl with his wife, Hilaria, so he can spend more time prepping for the baby’s arrival.

We also doubt he will be unemployed for long. In fact, he’s rumored to be taking a role in the upcoming HBO movie The Normal Heart.