“At some point,” she tells Good Morning America. Not right this second or anything. 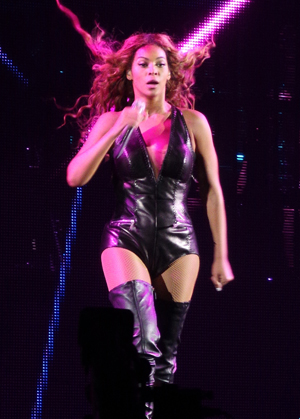 So maybe there’ll be two kids running around the million-dollar suite Beyoncé and Jay-Z rent in the Barclays Center: Queen Beyoncé says she wants to have more babies with Jay-Z.

“I would like more children,” she told Good Morning America‘s Amy Robach today.

“I think my daughter needs company. I definitely love being a big sister, and at some point when it’s supposed to happen,” she says, she’ll get pregnant again.

Beyoncé is very close to her singer sister Solange Knowles; perhaps she envisions a little sis to recreate the sisterly relationship with Blue Ivy.

She’s definitely is in love with motherhood: “My biggest job in the world is to protect my daughter, and I am very protective,” she told Good Morning America. “I just want to make sure that she can have a healthy, safe, normal life. I feel really, really just lucky that I can still do what I love and now have a way bigger meaning, and that’s to be her mother,” she said.

Beyoncé wowed the crowds in London Friday night by bringing toddler Blue Ivy onstage. At the end of “Irreplaceable,” Blue Ivy came out in a dress and with ear protection, holding her mama’s hand.

Beyoncé also enthused over her role in animated movie Epic, opening May 24.

“I was honored when they asked for me to do this role and I was actually pregnant at the time,” she said. “And I thought, you know, by the time this comes out my daughter will understand it’s my voice, and what an incredible, cool point. It’s a beautiful role and it has so much depth. It’s so emotional. I was crying when I did the voiceover. And it was the first thing I did after giving birth.”