Rihanna and Chris Brown’s on-again, off-again relationship is off once more, Brown confirms to a radio show. The problem is not a lack of love — it’s scheduling. 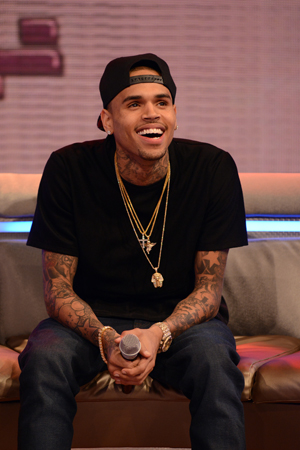 The singer confirmed a split with erstwhile love interest Rihanna on an interview with an Australian radio show while talking about the three, count ’em, three birthday parties he has lined up for his 24th birthday.

When asked if he was attending his trio of parties in New York, Los Angeles and Las Vegas solo, he answered in the affirmative.

“Imma do it solo,” the singer answered.

“I mean, at the end of the day, shawty doing her own thang, she on the road. It’s always gonna be love. I’m a grown man, just gotta fast forward.”

So if we can decipher that statement a bit: Rihanna’s busy with her own career, right now in the middle of her Diamonds World Tour. Too busy for love? Sounds like it.

Gossip that Brown and Rihanna were through began circulating a few weeks ago, particularly after photos surfaced of Brown seemingly romancing another woman at a club. Last Friday, ex-galpal Karrueche Tran showed up at Brown’s Los Angeles birthday bash, leading many to speculate that Brown had gone back to his old flame.

Brown was philosophical during his candid radio show interview.

“One thing I always want to do is never disrespect nobody or put nobody down. The way I look at it is that I am always gonna love that person and people have different wants and needs,” he said. “At the end of the day [Rihanna’s] a young girl. I can’t really be focused on wife-ing somebody that young, and I’m young too. I just got to step forward and be a man and be the best Chris Brown I can be, instead of worrying about whoever else is going to be in my side pocket.”

Is the world next to weather a stream of suggestive Instagram photos as a jealous Rihanna attempts to torment Brown electronically? Only time will tell.