Helen Mirren is appearing as Queen Elizabeth II in the London staging of The Audience — and on London streets where she dresses down a group of drummers for interrupting the show. 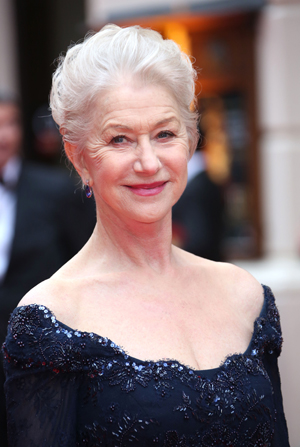 A group of London merrymakers got the shock of their lives Sunday when none other then Helen Mirren, in costume as Queen Elizabeth for her starring role in the play The Audience, came out to shriek at them for disturbing theatergoers with loud drumming — right in the middle of a show.

Mirren has the central role in The Audience, which depicts six decades of the monarch’s weekly meetings with her prime ministers. Apparently, she takes her role seriously.

One of the organizers of the group of 25 drummers that was marching through London’s West End to promote a gay music festival being held later in May, told U.K. paper The Mirror that “This little old lady came running out in a green dress, pearls, and a tiara, and headed for the conductor.”

Apparently, Mirren used un-Queenlike language to do so:  “She was saying, ‘Shut the f*** up, people have paid f***ing a hundred pounds for their theatre tickets,” the Mirror quotes. “She said the F-word about 20 times. I kept saying, ‘we didn’t realise’ and she was like, ‘just shut the f*** up’. You couldn’t get a word in edgeways, she was proper on a rant.”

“Not much shocks you on the gay scene,” another parade organizer told the Telegraph. “But seeing Helen Mirren dressed as the queen cussing and swearing and making you stop your parade — that’s a new one.

Yes, it would seem so.

The Telegraph reported the racket started during the play’s first act and that during the play’s intermission, audience members realized the noise was coming from the drummers. Mirren exited the stage door of the Gielgud Theatre to quiet the parade before the start of the second act.

According to the Mirror, the play had a further interruption due to a power outage in the second half; Mirren remarked about the fracas then: “Oh, and if you heard the noisy drums, I sorted them dressed as the Queen using some not polite language.”

Actor Andy Coxon, who is in a staging of Les Miserables in a theater near the Gielgud, tweeted his support for Mirren’s dressing down: “Thanku to Helen Mirren for going out & telling the morons drumming furiously behind our theatres to stop! Everyone @lesmisofficial loves u.”

Mirren told the Telegraph that she gave the drummers “a very stern royal ticking off” and she “felt rotten,” but the drummers were “very sweet and they stopped immediately.”