Justin Bieber was attacked by a crazed Belieber in the middle of his concert in Dubai! 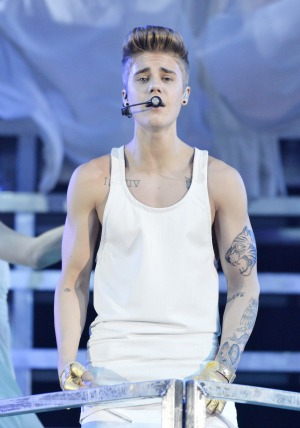 Justin Bieber’s trip to Dubai isn’t going so great. First, he was two hours late to his concert Saturday night, then when he finally went on stage he was attacked by a crazed fan!

The teen idol’s tardiness was noted on Twitter by BBC journalist Ghaffar Hussain, who wrote, “Justin Bieber disappoints fans in Dubai by being 2 hours late. But anyone mad enough to be a Bieber fan fully deserves it.”

When he finally did take the stage, he was jumped by a concertgoer who grabbed the singer from behind while he was seated at the piano — and once Bieber was able to free himself and run offstage, the tussle trashed the piano by pushing it off its hinges, rendering it unplayable.

Thomas Ovesen, COO at Done Events, confirmed the incident. “A young fan desperate to meet his idol did make his way on stage, but was immediately removed and Justin professionally continued with his show,” he told The National.

Justin Bieber threatens to take a break from music >>

“As far as we know no further action has been taken against the youth.”

Ever the consummate professional, a rattled Bieber finished the song with the help of his eight-piece band, then after a short break came back for an encore including the songs “Boyfriend” and “Baby.”

The ruckus didn’t stop Bieber from coming back for a second show on Sunday night, but unfortunately, he was tardy for the party once again.

“We really empathise with the fans and their parents who were affected by the delay and to whom this might have caused some inconvenience,” read a statement on the Done Events Facebook page, by way of apology.

Get the scoop of Justin Bieber and all your fave celebs — subscribe to the SheKnows Entertainment newsletter! >>