Reese Witherspoon would rather forget this week as a fourth arrest video is released showcasing her bad drunken behavior. Hopefully, she has learned her lesson. 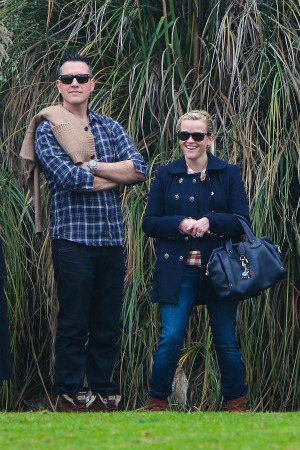 This probably wasn’t Reese Witherspoon’s favorite week ever. Not only did she go on Good Morning America to face the public about her arrest in late April, but she pleaded no contest to her disorderly conduct charges, and then TMZ released the police cruiser dash-cam videos.

In the fourth video made public on Friday, Witherspoon’s husband, Jim Toth, who was arrested and pleaded guilty to a DUI charge, is heard scolding his drunken wife. Neither the actress nor her CAA-agent husband are seen in the latest video, but their entire conversation in the back of the police car was recorded.

The first part of the newly released clip features Witherspoon mouthing off to the cop with “My name is Reese Witherspoon… It will be in the national news.”

The bickering from the This Means War actress continues as the law enforcement officer keeps his cool.

The second half of the clip involves both members of the arrested duo, with Toth clearly upset that his wife did not follow the officer’s instructions.

The 37-year-old Oscar winner shoots back at her husband saying,”He’s arresting us. For what? What have I done?”

Toth responds, “He told you to stop.”

Witherspoon who admitted to GMA‘s George Stephanopoulos that she said “all kinds of crazy things to the officer,” then launches into more crazy talk with her husband.

She says, “I’m an American citizen. I can say whatever I want to on free ground. He does not have jurisdiction over the ground he speaks on. He does not. I’m allowed to say anything I want to say.”

Even though Toth can be heard slurring a bit in the conversation, he tries to explain to his wife that she should have stepped back and let him take the heat for the DUI. However, the mother of three would hear none of that, and she truly had no clue about what she was doing in the moment.

She asks, “What did I get arrested for?”

“You wouldn’t listen to what he said,” Toth replies. “It just turned it really bad.”

Indeed it did. Witherspoon has accepted responsibility for her actions and will pay a $213 fine. Lesson learned, we hope.

34 seconds ago
by Alyssa K. Davis