Amanda Bynes creates her own special workout on the StairMaster. Are you coordinated enough to try it? 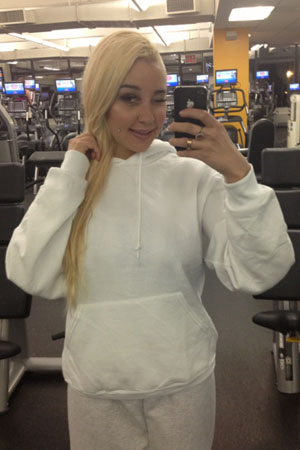 Think you know what you’re doing at the gym with your arm workouts and yoga? Well, you’re doing it all wrong. In reality, actress Amanda Bynes knows the secret to an incredible workout: You’ve gotta dance — in flip flops!

“Guys. Video of Amanda Bynes. At the gym. On a Stairmaster. In flip-flops. God has blessed us all today. #11secondsinheaven,” blogger Michelle Collins wrote on Friday, along with a link to the YouTube video.

In the clip, a woman — purported to be Bynes — is jamming out on the StairMaster while an amused gym goer looks on.

It’s a little… unconventional, but she looks like she’s having a good time.

It seems like the Easy A actress is spending a lot of time in the gym these days, judging from numerous TwitPic selfies taken near treadmills.

The actress has been pretty preoccupied with her weight for a few months now. She told US Weekly in February that she planned to get down to 100 pounds on her 5-foot 8-inch frame.

She repeated the goal earlier this week in a tweet.

The extreme workout video is just another example of Bynes’ increasingly erratic behavior.

Does she need help, or is she trolling us all? Something tells us that she knows exactly what she’s doing.

Watch Amanda Bynes on the StairMaster