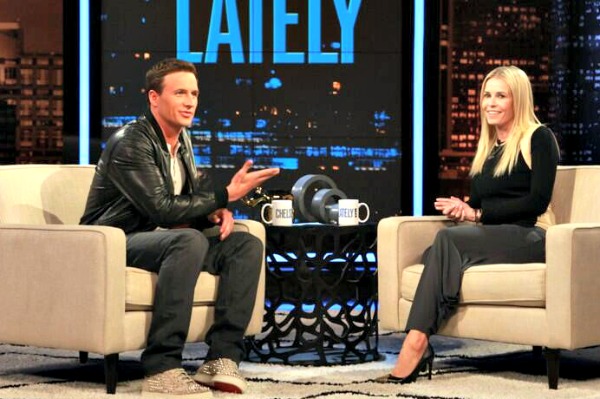 When Ryan Lochte sat down on Chelsea Lately Thursday night, the freshly minted reality star was given the romance inquisition. Getting straight to the point, Chelsea Handler delved into the comment the swimmer’s mom made about his habit of going “out on one-night stands.”

“My mom’s old-fashioned,” the What Would Ryan Lochte Do? star explained. “When she said one-night stands, [she meant] going on a date.”

Ryan Lochte is single, ready to mingle on new show >>

As a matter of fact, Ryan Lochte is looking for the opposite of such encounters. Insisting he’s sick of searching for a special lady to connect with, the swimming star said, “You know, I’ve done the whole dating game, I’ve experienced the whole college thing and, you know, I’m over it.”

The 28-year-old added, “I want to find that one that I could spend the rest of my life with and give my heart to someone. I haven’t found it yet.”

Ryan Lochte is modeling his career after Kim Kardashian’s >>

For now though, it’s train six hours a day and relax at night — though Lochte’s careful not to party too hard. Explaining his motto for such strict self-discipline, the catchphrase-coining hunk shared, “My philosophy is: if you’re a man at night, you gotta be a man in the morning.”

“So if I go out and beat my body up, go out drinking, dancing, staying up late, you know I still got a job to do and nothing’s gonna get in that way.”

Sounds like this guy’s ready to get as serious about love as he is about swimming!

Are you a fan of What Would Ryan Lochte Do?