Denise Richards has been awarded temporary custody of Charlie Sheen’s two sons after a court ruled Brooke Mueller is unfit to parent. 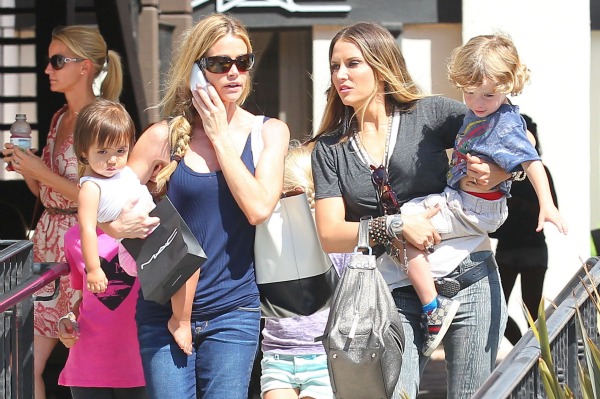 It’s a tale of two exes: Denise Richards and Brooke Mueller both have two kids by Charlie Sheen, but one has her act together and one most certainly does not. Now a court has agreed.

Denise Richards has been awarded temporary custody of Sheen’s twin sons Bob and Max after a court ruled their safety was in jeopardy because of Mueller’s drug use.

In fact, Mueller’s condition has deteriorated so badly that social services removed the children from their home themselves.

Check out the latest celebrity scoop by subscribing to the SheKnows Entertainment newsletter! >>

“Brooke was given many opportunities by social workers to clean up her act. Social workers felt that Bob and Max weren’t safe in Brooke’s care,” a source told Radar Online.

“The decision was made late on Thursday afternoon, and the boys are no longer in Brooke’s care… Denise loves the boys and their safety and well being mean everything to her. Bob and Max are safe and that is all the matters. Denise is simply complying with the court order.”

Richards has taken the boys in while Mueller was in rehab before, but this court order might be rock bottom for the troubled mom.

“Brooke is in a very, very bad place right now. She is absolutely despondent that she lost the boys. Maybe this will finally make her realize that she needs to get help.”

Mueller has long struggled with drug abuse, facing multiple arrests and rehab stints since her split from Sheen. The split resulted from a 2009 domestic disturbance in which she claimed he held a knife to her throat. Sheen has joint legal custody of the boys, but Mueller gained physical custody after his infamous Two and a Half Men breakdown.