Cory Monteith is taking Canada by storm after a 30-day stint in rehab. Standing by his side every step of the way is his Glee co-star and girlfriend, Lea Michele. 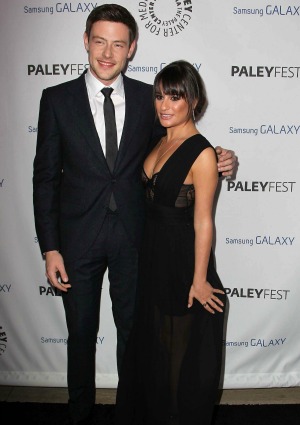 Lea Michele promised to stand by her man when Cory Monteith checked into rehab in late March and it looks like she is keeping her word. The couple showed a united front when they attended a Vancouver Canucks hockey game for the Stanley Cup playoffs.

Monteith left rehab in late April after voluntarily checking himself in for substance addiction. This was the 30-year-old’s second time in rehab after doing a stint when he was 19 years old.

It was reported by omg! that he spent his 30 days at a facility on the Caribbean island of Antigua. His stint caused him to miss the final two episodes of the season for Glee, but he had the full support of the cast and crew.

Michele seemed to be there every step of the way. His reunion with his girlfriend of over a year was documented by fans who spotted them at LAX on April 26.

Monteith tweeted to his followers upon his release, “sending out big love to everyone. thank you for the continued support! It means the world to me! :)”

After their airport rendezvous, the duo immediately flew to his native Canada.

A source told omg!, “[Cory] is doing great. Lea and his family were so supportive. Knowing he was coming back to that support system was huge.”

The two have been spotted doing normal couple activities all over the area, from grabbing a cup of coffee to having dinner with Monteith’s family. So their Wednesday night appearance at the hockey game was no surprise.

They both sported Canucks fan gear, but they seemed a tad bit embarrassed when their image was projected on the Jumbotron. They played along with a wave, a smile and a point to their Canucks hats in support of the team while Captain and Tennille’s “Love Will Keep Us Together” played in the background.

It seems like a fitting anthem for the two lovebirds.

Watch the video of Cory Monteith and Lea Michele at the Canucks game.