Jenny McCarthy was just trying to help a girl out, but Amanda Bynes sure didn’t like her help. Their Twitter feud finally ended with a truce on Thursday. 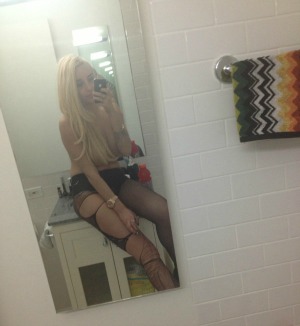 Sometimes social media is a blessing and sometimes it is a curse. Amanda Bynes’ Twitter account has seen more action during the last six months than perhaps any other celebrity account.

Bynes posts daily photos of unusual activities she is involved in during her day-to-day life. A photo posted on Wednesday started a feud between the former Nickelodeon star and Jenny McCarthy.

It all began when Bynes uploaded two photos of herself taken in the bathroom mirror. Her hair and arms covered her naked breasts while only torn stockings and black underwear covered her lower half.

She wrote on her Twitter account, “Police are at @AmandaBynes house. I hope they get her help. Enough of this circus. She needs help.”

There is no word on who supposedly called the police, but Access Hollywood spoke to a rep from the New York City Police Department. NYPD confirmed that there was no 911 call placed to assist the former teen star. McCarthy later confirmed she had heard the news from a publicist.

Well, Bynes did not enjoy the former Playboy Bunny’s call to action.

She tweeted directly at the funny woman: “@JennyMcCarthy you’re ugly! Police weren’t at my house old lady! Shut the f**k up!”

The What I Like About You actress continued, “@jennymccarthy I need help? What are u talking about? Aren’t u 50 years old? I’m 27, u look 80 compared to me! Why are you talking about me?”

McCarthy called a truce on Thursday morning because she was just trying to help the retired actress, who seems to be crying for attention through social media.

The VH1 star tweeted, “@AmandaBynes sorry girl. Looking out for ya.”

That final tweet from McCarthy seemed to appease the troubled 27-year-old. She accepted the peace offering with, “@JennyMcCarthy thanks! I’m sorry I offended you! You’re beautiful! I was lying! I’ll delete our tweets!”

Fans are baffled as to what is troubling Bynes. Her family can only look on helplessly since she is estranged from them.

However, Bynes seems to think she is OK.

She told In Touch magazine on Wednesday, “I have no clue [why people say I’m insane]. Every time I’ve heard it, it came from an ugly person’s mouth, so I don’t care. The only ones lying about me having a mental illness are people I don’t talk to.”

Whatever is ailing her, let’s hope she gets the help she needs.