Chris O’Dowd may be done with HBO’s Girls, but HBO isn’t done with O’Dowd. Thank goodness! 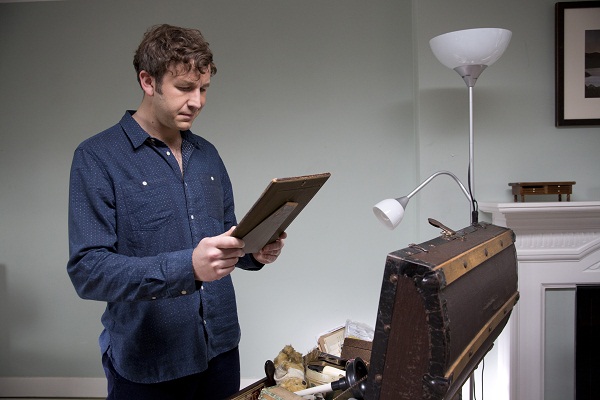 Everyone’s new favorite Irishman is returning to the small screen in about a week to star in HBO’s newest comedy, Family Tree. It sounds pretty interesting, and not just because it’s a chance to see Chris O’Dowd.

We think O’Dowd is man candy >>

Family Tree is all about Tom Chadwick (O’Dowd), a down-on-his-luck 30-year-old who has just lost his job, his girlfriend and the remainder of his self-worth. Just when he thinks things couldn’t get any worse, his great-aunt dies.

Upon her passing, he inherits a mysterious chest. From the box to various points around London (and eventually America), Tom follows clues in an effort to uncover the mystery inside. Along the way, Tom is aided by his sister Bea (Nina Conti) and best friend Pete (Tom Bennett). As he comes into contact with more strange characters and visits a multitude of new and familiar places, Tom uncovers stories of his family. The hunt to solve the mystery will also lead Tom to a bit of self-discovery.

The man can carry a tune >>

Chris O’Dowd has quickly stolen our hearts with his accent and his awkward, self-doubting humor. From the time we saw him in Bridesmaids (alongside Melissa McCarthy, who might soon join him on-screen, again), we knew we liked him. Some of us, being incredibly obsessive and boy-crazy, immediately went out to watch everything he’s ever been in. That included the quirkily awesome U.K. show about those IT guys in every major office’s basement, The IT Crowd. And then… then there was his role on Girls, where he played a high-strung rich guy married to a free-loving hippie. Not exactly his funniest role, but still a chance to watch him in action. (We also highly recommend checking out Pirate Radio.)

Family Tree kicks off its 8-episode season on May 12 at 10:30/9:30c on HBO, and promises to be one interesting and funny adventure with O’Dowd. We can’t wait!

Sign up for our newsletter for more TV and movie news >>