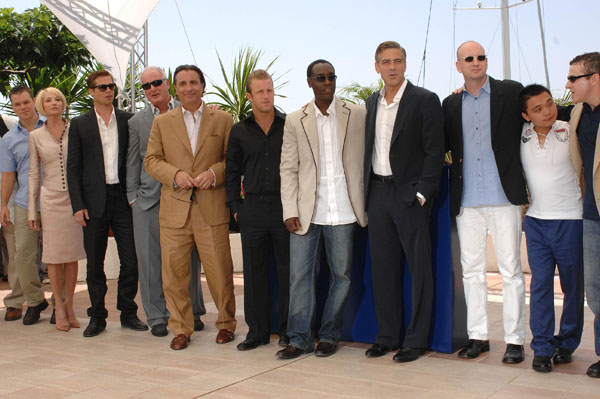 Weintraub got Clooney back, but this prank turned kind of violent.

“I had a gold silk shirt — a very expensive gold silk shirt — Clooney hated,” Weintraub told the Los Angeles Times. “Once at the Bellagio when we were doing Ocean’s, I was having drinks with the guys, and Clooney sneaked into my closet and stole the shirt. That September, for my birthday, I received a big box wrapped with ribbon — and in it was my gold shirt. On the back, Clooney had drawn a picture in black marker of a giant penis, and he’d had everyone who participated in a charity golf tournament for prostate cancer in Las Vegas sign it, too. There were 30 signatures — Brad Pitt, Matt Damon, Don Cheadle, Wayne Gretzky…”

Guess who wants some sugar from George Clooney? >>

“So I opened the box,” he recounted, “jumped in my golf cart and drove over to his office — this was when we both had offices at Warner Bros. — Clooney was on the phone to [director Steven] Soderbergh, and there were people in his office. I walked in, took a golf club and broke up the place — smashing lamps, throwing a bicycle through the window, tossing scripts around.”

“Clooney was curled up on the floor, screaming to Soderbergh, ‘He’s gone nuts, he’s gonna kill us all.’ Now, I was just kidding, and Clooney knew it. But then the head of the club came off and flew across the room, just missing him. We looked at each other and figured it had gone far enough.” 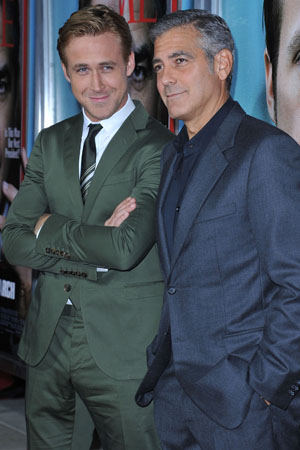 Note to everyone: Make sure Clooney isn’t carrying water with him while you’re talking to him.

“He will come up to you and tell you something very serious, and then you walk away and you realize your pants are wet,” Ryan Gosling recalled of his Ides of March co-star. “He’s had, like, an Evian spray bottle. He’s been spraying your crotch the whole time.”