Mad Men actress Linda Cardellini opens up about her difficult childbirth and the issue she had after her delivery. Sometimes childbirth is scary. 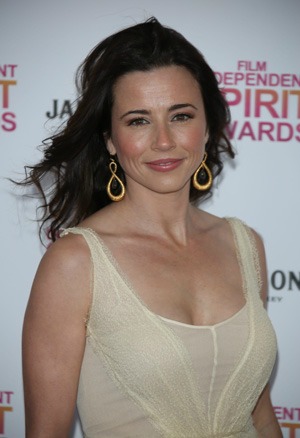 She may be having fun on the set of Mad Men as Don Draper’s neighbor and current mistress, Sylvia, but Linda Cardellini had a pretty hard time when it came to childbirth. The actress shared her story with People about the delivery and the aftermath.

The 37-year-old gave birth to her first child with boyfriend Steven Rodriguez in February 2012. The actress finished out her ninth month with a bout of pneumonia, which led to her hospitalization when there were complications. Then came the delivery.

Cardellini told the entertainment magazine, “It was a very traumatic period. I had a really scary pregnancy and a very difficult delivery. My daughter and I are lucky to be alive.”’

What Mad Men got wrong >>

Daughter Lilah-Rose came into the world, but not exactly how Cardellini had in mind.

She said, “Her heart rate dropped and she had the umbilical cord around her neck. We had to do an emergency C-section. It was very intense and scary.”

The good news is that her baby girl came into the world healthy and happy after a few intense moments during delivery.

“I’m so grateful that my daughter is alive and so thankful that we’ve all come out of it,” Cardellini shared. “We often forget how dangerous childbirth is.”

However, it wasn’t smooth sailing for the new mom. The former ER actress found herself with a thyroid issue that affected her weight.

Cardellini shares, “I had to go on medication and because of that my weight fluctuated up and down in a really erratic way. It was hard to get a handle on it.”

The good news is that mother and daughter are now feeling fantastic. Lilah-Rose is now 14 months old and thriving. She’s even proving to be a budding fashionista with strong opinions.

“My daughter is very social and opinionated and likes to push her limits,” Cardellini said. “Before she was even [a year old], she pointed to what clothes she wanted to wear. She’s very persistent and she knows exactly what she wants even though she doesn’t have the words to say it.”

It sounds like the journey was well worth it for the former Freaks and Geeks actress. She knows the joys of becoming a mom and the rewards it delivers.

“I never realized what an enormous amount of love I could feel for someone. Suddenly, now that I have this beautiful, innocent creature to protect, I’ve become more aggressive and become much more of a mama bear that I would have never imagined,” revealed the actress.

In addition to Mad Men, Cardellini is working on an animated series for Nickelodeon called Sanjay and Craig. It is set to debut on May 25.