In a perfect world, Julia Louis-Dreyfus would be vice president. Would she be as hysterically awkward as her character Selina Meyer? 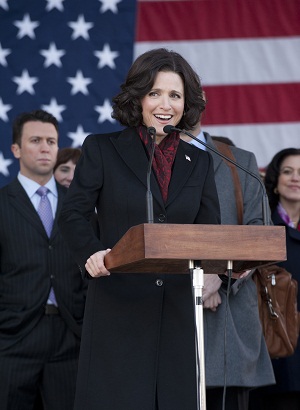 The second season of HBO’s Veep premiered just two short weeks ago, but the premium channel has already renewed the show for a third season.

The show is powered by Seinfeld vet, Julia Louis-Dreyfus. It follows her character, Vice President Selina Meyer, and her staff as they navigate their way through the politics of playing second fiddle to the most powerful man in the country.

Not only are they in a constant race to keep up with the prez, but they’re also caught in the never-ending battle of fixing their mistakes as the first-time veep and her small, mostly inexperienced staff tries to do the “right thing.”

Most often, their biggest foe is themselves. A close second, though, is Jonah. Jonah is a tall, awkward, but confident grunt from the president’s office whose only purpose seems to be to carry information from the president to the vice president… something he continues to do in person despite this new technology called “email.”

Of the issues faced in the first season, the two biggest were caused by the veep herself. The biggest “mistake” she made was thinking she might have been pregnant. The purchase of a pregnancy test and the confusion that comes with having an office run by more than one idiot made for an awkward day for the veep. Another time, she had a Secret Service agent replaced after he snickered at her. The request is sent to the media and blown wildly out of proportion, leaving Selina looking like a real villain.

Earlier this week, the fictional vice president made a mad dash for a military base to be on site for a very important day. First, she lets out of string of unladylike curse words when she’s coerced into firing a gun. Later, her office is called into court over the irresponsible spending that took place when she drove out to the base with her own motorcade instead of teaming up with the secretary of state, who was also on hand.

What’s ahead for the rest of Season 2 and on into Season 3? Only time will tell!