Splash contestant Nicole Eggert talks about her injury on the reality diving show and why she shouldn’t have posted the photo of her bruised back. 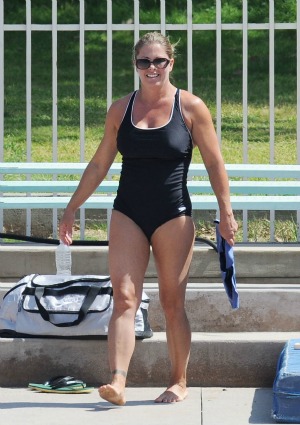 There have been quite a few accidents on the set of ABC’s reality show Splash, and one contestant is speaking up about her injury. Former Baywatch star Nicole Eggert has returned to the pool after a scary dive.

Eggert back-flopped from the high dive. She explained the injury to Yahoo! TV saying, “It wasn’t a bad flop. I did land my dive. My legs just weren’t as strong as they could have been. When you hit the water going that fast, from that high up, it makes the rest of the body flop.”

Katherine Webb dives back into the spotlight >>

While the actress was smarting from the dive, she didn’t go to the hospital right away. She decided to go to the doctor the next evening to make sure that “everything was intact, in the skeletal way. And then I wanted to make sure the organs were OK. It took a couple of visits between the swelling and the bruising to see what was going on.”

The publicity surrounding her bruised back only got worse when she decided to post a photo to Twitter. That caused a sensation on the social media site in addition to a few media outlets asking if the show was too dangerous. Eggert has since removed the photo from her account.

She revealed, “I was getting so many emails and messages and tweets. Everybody wanted to know, and I wanted to share with people: Yeah I’m cool, here’s the damage. I had it up for like a half an hour. And at some point in that half-hour they grabbed it. I’m not blaming the person that took the picture, because they took it on my phone. I probably shouldn’t have posted it.”

The former child star doesn’t think Splash is too dangerous despite protests from some viewers to cancel the show. She knows that diving is a risky sport, but the actress knew what she signed up for.

“It’s a sport! It’s been a sport for a very long time. It all depends on the individual. Are you down for it? Do you want to do it? If you don’t want to do it or you don’t think you’re capable of doing it, I highly suggest you don’t do it,” the 41-year-old contestant said. “If you’re into that kind of thing, for sure, why not? To me it’s amazing; you’re being trained by the best of the best.”

Eggert’s return to the diving board is definitely courageous. She is now one of the final three contestants along with Rory Bushfield and Drake Bell.