Miley Cyrus wants to spend all of her time with fiancé Liam Hemsworth, she says. The problem? They’re just too busy. 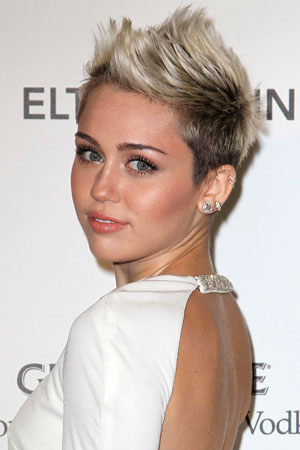 Billy Ray Cyrus might not know whether or not his daughter, Miley Cyrus, will ever get married to The Hunger Games star Liam Hemsworth, but the actress insists that they’re still good — just busy.

“I’m not home with my boyfriend all the time,” Cyrus told V Magazine‘s May issue. “We work! He gets up to work out at six and I come home around five from the studio.”

The constant speculation over their relationship is just a lot of talk, she continued.

“Every week it’s, ‘Are they broken up? Because we don’t see a photo of them,'” Cyrus added. “I don’t have time to go to Starbucks with my boyfriend every morning. I wish I did, but I don’t. I’d rather chill at my house and be there for the time I actually get to spend with him.”

The tabloid furor has inspired Cyrus to keep her life private, she told Elle U.K. in a new interview.

“We were too nice to the world and gave them too much insight — into my life and my puppies and my house — and I just don’t feel they get that privilege anymore,” Cyrus told the magazine. “Like on my Twitter, I’m much more… not conservative, but you don’t see a picture of my dogs. You don’t get that personal stuff anymore.”

But, that might backfire, since so-called “sources” are eager to dish all to the tabloids on the status of their relationship.

“They’re not done, but they are dissolving,” one of those dubious sources told Us Weekly, adding that Hemsworth is the one with cold feet.

“They’ve both been getting pressured by their management teams to hold off on the wedding, but it was Liam that gave in first and admitted that they should wait,” another source told HollywoodLife.

“We have a house together and dogs. It just seems right to be wearing this ring and to be committed,” the singer added to Elle U.K.

“But we keep our relationship low-key and don’t talk about it anymore.”