A photographer is suing Rob Kardashian for assault and robbery for an incident outside a West Hollywood gym in March. The reason? She was trying to get a photo of him shirtless — and he didn’t like it. 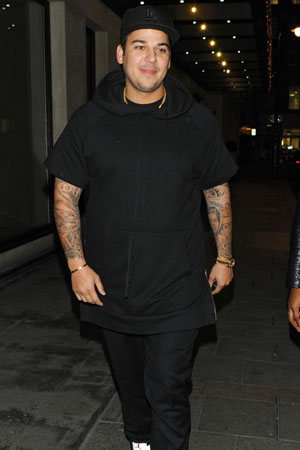 Will baby Kimye have to visit Uncle Rob Kardashian in prison?

OK, that’s taking things a little far, but a female photographer is suing the 26-year-old reality star for assault, according to TMZ.

It all went down last month. According to court documents, the 26-year-old yanked photographer Andra Viak’s memory card from her camera outside a West Hollywood gym. She was reportedly there to get shots of a shirtless and sweaty Kardashian.

If you’ll recall, the one-time Dancing With the Stars contestant is trying to drop 40 pounds off his tall frame — a remnant of his now-defunct relationship with British singer Rita Ora.

And that’s exactly why Viak was waiting for him. According to Kardashian, the photog waited in her car on private property for him to take his shirt off. Witnesses backed up his account, though the paparazzo still filed charges.

“While this case is still in the preliminary stage, it is clear from our investigation that Robert Kardashian’s violent behavior and his use of force towards Ms. Viak was completely unjustified,” her lawyers told TMZ.

We think Rob has a good chance of winning this one.

Let’s hope it doesn’t derail his weight-loss efforts, though. Not that sister Khloe Kardashian will let him forget: she’s championing his “fat boy” diet.

“Another fat boy breakfast. Let’s go! 5 mile run next. 50 pounds gots to go!” she wrote on an Instagram shot of her brother. “I believe in YOU.”

Something tells us that Khloe is a pretty convincing person.

Read on for more Rob Kardashian