It has been five years since the unlikely couple said “I do,” but they showed how committed they are by renewing those vows on their anniversary. 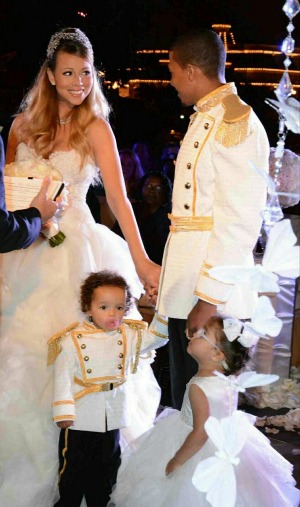 It’s hard to believe it has been five years since Mariah Carey and Nick Cannon wed in the Bahamas. The bride was more than 10 years older than the groom and many said their relationship wouldn’t last. But last it has. The two took a step to further prove that Tuesday night, on their fifth anniversary, by renewing their vows.

Their twins were born on the third anniversary of their parents’ wedding, and celebrated their second birthday along with their parents at Disneyland.

“According to [Entertainment Tonight], the couple had a birthday celebration for their 2-year-old twins, son [Moroccan] and daughter Monroe, at a prince and princess-themed party prior to the ceremony, with Disney princesses and Mickey and Minnie Mouse among the attendees,” said CBS News.

Carey and Cannon used the Disneyland trip as an opportunity to show their continued commitment to each other, and they went all out for this wedding.

“The singer/American Idol judge wore a princess-inspired bridal gown for the couple’s vow renewal, which took place in front of Sleeping Beauty Castle,” CBS News said. “She and her daughter traveled by horse-drawn carriage to the ceremony, where they were met by Cannon and their son, both dressed as princes.”

The theme of the wedding was “Do you believe in fairy tales?” and the ceremony was followed with a fireworks display and reception, with music provided by Cannon.

“ET reports that the space was adorned with 15,000 flowers imported from South Africa, Holland and France, and 10,000 crystals,” CBS News said. “Guests also were able to ride the Matterhorn Bobsled roller coaster and enjoy other attractions while the park was closed to the public.”

The wedding is a bright spot in the dramatic life of Carey these days. Rumors are that Fox has asked Jennifer Lopez to return to American Idol to replace Carey, after only one season.