You know how when you watch 20/20 or Dateline about a murder and you can usually tell in the first five minutes if someone is guilty or innocent? Diane Sawyer’s interview with Amanda Knox profiled so many obvious flaws in the case that it makes us wonder why this is still a story. Join us for a little amateur detective work… 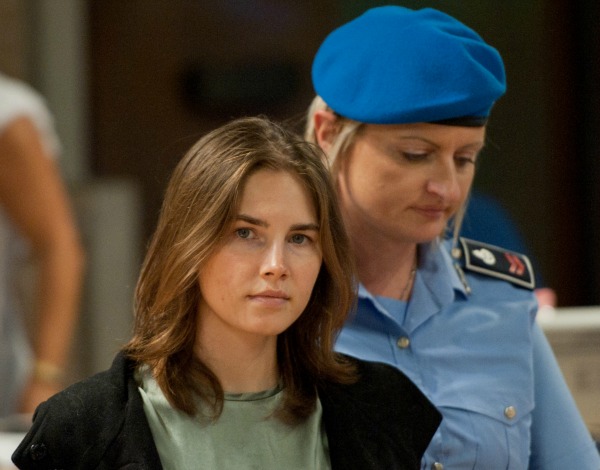 In an interview with Diane Sawyer on Tuesday night, Amanda Knox — an American exchange student living in Italy who was convicted and later acquitted of her roommate’s brutal murder — struck terror in all our hearts. As Amanda’s story unfolds, we learn of how a young college girl’s thirst for adventure in a foreign country can change the course of her life forever — if she survives it — which poor Meredith Kercher did not.

Amanda told Diane Sawyer in the interview that she was heavily interrogated after Meredith’s murder, in Italian, a language she was just beginning to learn after being in Italy for five weeks. Amanda was also told that getting a lawyer would only make things worse for her, and there is no recording of the interrogation. There are three red flags right there — translation errors, no legal representation, and no proof of what was said during the interrogation. We’re not detectives, but that seems a bit suspect.

Keep up on all the latest news concerning high-profile cases — subscribe to our newsletter!

Amanda was persecuted in the Italian media for the sex crime she had allegedly committed because she was perceived as promiscuous. While she was serving time in jail after being convicted of Meredith’s death, she was told she had tested positive for HIV. She put together a list of boys she had slept with, which totaled seven. Seven? College girls everywhere just rolled their eyes at that. Amanda also admitted to smoking pot with her new boyfriend, Raffaele Sollecito, on the night of the murder.

Amanda comes across as a bit strange in the interview (who wouldn’t be after what she’s been through), but being strange, sleeping with seven guys, and smoking pot while in college does not a murderess make. If it did, the incidence of college murders would be through the roof. As it turned out, Amanda was not HIV positive, which was just one of several blunders (red flags) committed in this bizarre story.

Stand by your gal

Raffaele Sollecito, the Harry Potter-like boyfriend that Amanda had known for seven days (seven days!) never sold her out to police. Amanda and Raffaele told police they had spent the night together at Raffaele’s on the night of the murder. When Italian police offered to let Raffaele off the hook if he told them that Amanda had left his apartment that night, he refused, which seems like another red flag. He had known Amanda for seven days. What did he have to lose by selling out an American girl he may never see again if it got the police off his back?

If you take all the “he said,” “she said,” “the media said” out of this, one undeniable fact remains: There was no reliable DNA belonging to Amanda Knox found at the crime scene. The crime scene was contaminated and handled in a way that reminds us of Barney Fife’s detective skills from The Andy Griffith Show. Police found a bra clasp fragment that allegedly contained Amanda’s DNA, but it was collected six weeks after the murder, by a guy wearing dirty gloves!

This story plays out like a really bad version of the game Clue. One poor college girl, Meredith Kercher, lost her life in a despicable way that strikes horror and fear in the hearts of mothers everywhere. Another college girl, who was living a carefree life with a new boyfriend and whose biggest crime seems to be her inability to speak Italian on that fateful night, also strikes terror in the hearts of college moms everywhere.

The Diane Sawyer interview played out like a cautionary tale for college girls, and an embarrassment for the Italian judicial system.