Amanda Knox sat down with Diane Sawyer and explained exactly how Italian police got her to confess to a crime she now insists she did not commit: The murder of Meredith Kercher. 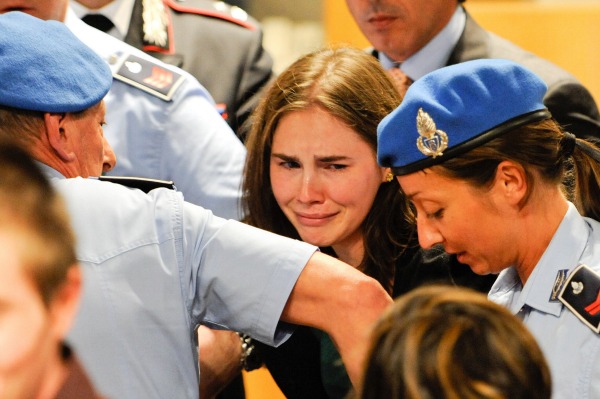 Alone in a strange country, accused of a horrific murder — it sounds like the stuff of nightmares, but for Amanda Knox it became a nightmarish reality.

In an exclusive interview with ABC News’ Diane Sawyer, Knox laid out how it all went down while discussing her new memoir Waiting to Be Heard.

Explaining behavior that police called suspicious, including allegedly turning cartwheels in the hallway of the police station, she said, “It never occurred to me that I would ever be considered a suspect. Ever.”

“I never did a cartwheel. I did do a split,” Knox admitted, adding that after sitting for hours, she began to stretch when a policeman commented on her flexibility.

She also revealed how police allegedly coerced a false confession from her, saying they yelled at her, hit her in the back of the head, and repeatedly threatened her with 30 years in prison during the hours-long questioning.

“I can only describe it as breaking down. I didn’t know what I remember anymore. I was wracking my brain for an answer to what happened. I was demolished in that interrogation.”

No tape of the session exists, a decision prosecutors say was made to save money.

“And the only thing that is left is the police’s word versus mine, and a couple of documents I signed when I had no lawyer present. This is what I’m up against,” Knox explained.

Are you a celebrity justice junky? Subscribe to the SheKnows Entertainment newsletter! >>

No DNA from Knox or her ex-boyfriend Raffaele Sollecito was found in Meredith Kercher’s bedroom — the scene of her murder. The only outside DNA found was that of local man Rudy Guede, who was later convicted of the crime and confirmed in a secretly recorded phone call that Knox was not present at the time of Kercher’s death.

But the lack of evidence meant nothing in her first trial. She was convicted and sentenced to 26 years in an Italian prison.

“For all intents and purposes, I was a murderer, whether I was or not. And I had to live with the idea that would be my life. I would be one of those people who suffered an incredible, mind-boggling injustice,” Knox said.

“I felt assassinated as if I were being sealed in a tomb. And the tomb was my life, it wasn’t prison.”

Her conviction was overturned on appeal in 2011, but a court later ruled there was enough reason to retry her. For now, she waits.

Watch Amanda Knox talk about her life in prison