Former reality star Kristin Cavallari is putting her acting career on hold to focus in on the things most important to her — love and family. 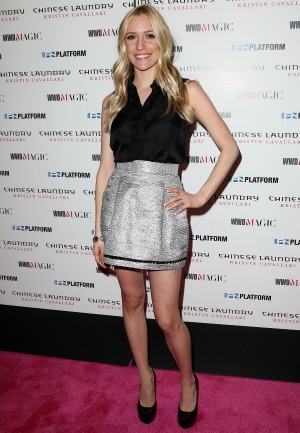 Ever since her reality show beginnings on Laguna Beach: The Real Orange County on MTV, Kristin Cavallari has been focused on her career. That all changed last year when she gave birth to her first child, son Camden, with her fiancé Jay Cutler.

Cavallari spoke with Coco Eco Magazine about her acting career for its April/May issue.

She revealed, “I’ve passed on a couple of things that would have kept me here in L.A. because my fiancé Jay has to be in Chicago, so if I was here, we would never see each other. The sacrifices we make for love…”

Kristin Cavallari dishes about fashion as a new mom >>

The 26-year-old was last seen in a guest-starring role in the TV series The Middle in 2011. Even though she is putting her acting career on hold while Cutler plays football for the Chicago Bears, she isn’t completely putting everything on hold. Cavallari continues her work in fashion with a shoe line for Chinese Laundry.

“It’s easy to get wrapped up in your career and have that be your only focus, and I want my marriage to work and last — and family comes first,” she says. “The design work is great because I can do most of it from Chicago and I have so much fun with it. I love it and it all works out.”

Kristin Cavallari talks the real story behind The Hills drug use >>

Now that baby Camden is 8 months old, when is that wedding going to happen between Cavallari and Cutler? A recent discovery of her wedding registry gave out a fake date because the couple hope to keep the nuptials as private as possible.

The former reality star told the magazine, “The old marriage question! All I’ll say is we’re planning a big summer wedding, but I’m keeping it a secret.”

This gal clearly has her priorities straight by choosing family over fame and fortune.

13 mins ago
by Kay Snowden

20 mins ago
by Kay Snowden