With an acclaimed debut album under his belt and a new one coming out May 7, country artist Craig Campbell talks to SheKnows about his career as a songwriter, his family and living his life without regret. 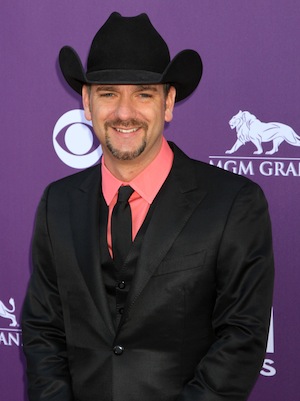 After releasing his self-titled debut album in 2011, Craig Campbell has been writing and recording new music with a little help from his friends, like country superstar Luke Bryan.

His sophomore album, Never Regret, will be released May 7, and while his devotion to his family is still there, this album features a different side of Campbell.

SheKnows talked to the singer about his transition from hard-working family man to country singer.

From correctional officer to country artist

SheKnows: There are still a lot of people out there just getting to know you, so let’s just start with the basics and tell me a little bit about yourself and your background.

Craig Campbell: I was born and raised in a small town down in South Georgia and I graduated high school then started working at the Department of Corrections for a couple years as a correctional officer. A couple years after that I decided I didn’t want to do that anymore and I put a band together. I moved to Nashville and here we are 10 years later.

SK: You said you were a correctional officer. Was there one moment where you kind of realized that music is what you really wanted to do?

CC: From the time I started I knew I didn’t want to be doing that. I wanted to play music but I had a girlfriend and we had talked about getting married and buying a house. The quickest way for me to get there was to start working at the Department of Corrections but that all went away. Thank God it did because that put me on the track to move to Nashville.

SK: Now I know that you played keyboard in Luke Bryan’s band. What is he really like?

CC: He has one of the best senses of humor that I’ve ever been around and what you see on stage is what you get. Luke is a full blast and his main goal is to put on the best show he possibly can for his fans and he is dang good at it.

SK: Do you have a favorite memory with him?

CC: It would have to be him sitting across the table at Sonny’s Bar-B-Q down in Statesboro, Ga. I asked him for some advice and he told me I need to be writing songs. From there I came back to Nashville and got after it.

“Because I want to”

SK: When you are writing or co-writing songs, where do you pull your inspiration? I know you have a family and that must be a big part.

CC: Oh yeah. You know my little girls are so inspirational and my wife. Anything that I’ve done in my life, we try to channel all that into song writing. One morning I was getting ready to go and asked my little girl Preslee, “Why are you wearing a tutu?” She said, “Because I want to.” I just thought that was the funniest thing because there’s not really an argument that you can give somebody when they just tell you straight up, “Just ‘cause I want to.” So I went to town that morning and I wrote a song “’Cause I Want To.” They inspire me everywhere.

CC: No. Me and my father in-law hit it off pretty good right off the bat. I guess that had a lot to do with the fact that he lived in Colorado and I lived in Tennessee and that we didn’t really dislike each other. I wasn’t too afraid to ask him for permission but I do know some people that when it came time to pop the question they had to go through their baby’s daddy first so I knew all about it. Any guy that’s married will know exactly what I’m talking about when they hear this song.

SK: Being married and with two kids, how do you juggle touring and still being there for your family?

CC: Well, when I’m on the road, we try to stay in touch with the Facetime and Skype and all that stuff. But the biggest part for me is when I’m home, I try to be home. Instead of having a whole bunch of things to do, I try to be there for my girls and try to catch up. When I’m home I just try to turn my phone off and try to turn the computer off and just hang out.

SK: Do you have a favorite memory of being a dad?

CC: The very first time they cried was magic. You think you know what love is, there’s just no way to explain it. Just to know that the very first time you hear your child cry is just an instant wow. “She’s mine.”

SK: Let’s talk about your upcoming record coming out on May 7 — Never Regret. Tell us a little bit about what everyone can expect from the album.

CC: I covered some topics that I didn’t cover on the first album. There are some sexy songs on here. There is a very vulnerable song on here called “You Can Come Over” which is told from a guy’s point of view. But there’s also a few songs on it that are very reminiscent of the first album — very family-oriented, the struggles of being married, you know just stuff like that. I think it covers all the bases and it’s a pretty traditional country record and I am very proud of it.

SK: What was your goal going into the studio for this record to make it stand apart from the first album?

CC: Mainly the subject matter was a big part of it. I also wanted it to be a bigger sounding record and have a little more energy so we brought in a whole brand new band. There is more tempo to this record and that was my goal.

SK: I watched your music video for “Outta My Head.” How was acting for you?

CC: Ya know, I’ve been in all of my other videos but I never had to really “act.” The cool thing about this video was that the main part for me was just to act confused, which is not that hard for me to do. I will say that having to kiss another woman on set was kind of challenging, but my wife was on set as well so she saw it all go down. She surprisingly enough was cheering me on telling me to make it look more real. I was like, “Wait a minute, now.”

SK: How did she react when you first told her you were going to have to kiss another woman?

CC: We went through the video treatments together so she knew. I said, “You don’t mind me kissing another woman?” And she’s like “No.” She’s been super supportive.

SK: Obviously I can imagine that’s kind of uncomfortable. Did you get a say on who this woman was going to be?

CC: I kind of gave them some parameters. I said I wanted girl with long hair and I didn’t want her to be taller than me, so they sent me three or four over and I actually let my wife choose the one.

SK: Now that you have “Outta My Head” under your belt, could you see yourself ever acting in the future? Maybe a guest cameo on Nashville?

CC: Oh I’d love to. I’d probably incorporate some acting coaches before I did anything like that just because I don’t think I’m very good at it so I’d need someone to help me out.

Which country superstar is going to be on the season finale of Nashville? >>

The future according to Craig Campbell

SK: What do you hope to still accomplish in the year ahead?

CC: I just wanna be able to keep making music, I wanna stay in the game, my main goal right now is to get my song “Outta My Head” up the charts — make it a hit song so that we can keep doing what we’re doing. Whatever I do, I just want my family to be proud of me.

SK: Is there anyone you’re hoping to work with in the future?

SK: Speaking of bucket list, do you have a bucket list of things you want to do in your life?

CC: The funny thing about my bucket list is that I never know what’s on my bucket list until I do it. I didn’t know that I wanted to go to Switzerland until I went to Switzerland, and then I was like “Oh this is awesome!” I could leave this world today and be totally satisfied with what I’ve done.

Check out our exclusive interview with country star Brantley Gilbert >>

Check out Craig Campbell’s acting in the video for “Outta My Head”. Let us know what you think in the comments below.