Steve Nash’s child support battle is heating up. There’s a reason he’s allegedly fighting to pay the amount his ex wants — but is it a good one? 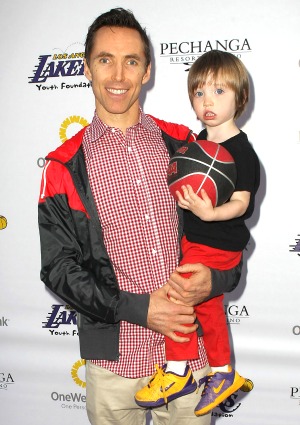 Steve Nash’s reason for dragging his feet on child support payments is one we’re not used to hearing. Take a gander at what the basketball star has to say, and judge for yourself if he’s got reasonable ground to stand on!

Alejandra Nash has taken her ex-husband, Steve Nash, to court to appeal a judge’s 2010 decision not to grant her child support. Despite getting millions in their divorce settlement and continuing to make a reported $30,000 per month, she believes the baller should have to pay even more than he does in their current arrangement.

Reports state the 39-year-old, seen here in early March with Matteo on his hip, currently pays 90 percent of school, hobbies and medical expenses, as well as 82 percent of his kids’ nanny’s $2,000 monthly salary.

At some point it seems he began to wonder: How much more could three kids really need?

Steve Nash moves to the Lakers to be a good dad >>

Despite making a fine living herself, brunette beauty Alejandra is quick to point out her ex pulls in an entire million more than she does every month.

At the heart of Steve Nash’s argument against paying more child support is not that he can’t afford it, but simply that he doesn’t want to pay more because he’s worried his kids will end up spoiled. Reports from TMZ claim he fears Alejandra is an “excessive spender,” who will spoil and damage 8-year-old twins Lola and Bella and 2-year-old Matteo with luxuries.

She’s also working on relocating the family away from Arizona, where she was not awarded any child support, to Los Angeles — a move the Lakers star has objected to.

What do you think of Steve Nash’s child support stance?