Forget the ditzy, stuck-up version of Nicole Richie that was Paris Hilton’s bestie. This is the new Nicole… and we kinda love her. 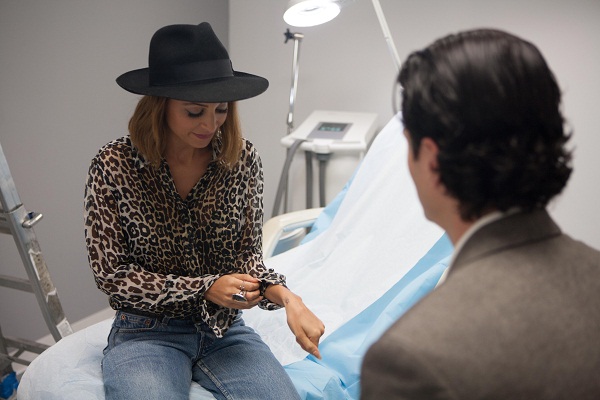 So, Nicole Richie has a new show (sort of) and so far it seems pretty awesome!

Richie is more than just the pretty-faced daughter of legendary singer Lionel Richie. She’s also a mom, an actress, a writer, and the creative director for House of Harlow 1960 (named after her kiddo) and Winter Kate. In other words, she has her hand in many pots.

The most recent pot she has set to boiling is her new show, #CandidlyNicole. Based on her often hysterical and always candid tweets, #Candidly takes viewers inside the world of one of America’s most widely known names. As if following Richie’s completely uncensored Twitter feed wasn’t enough, now fans can watch her as she takes on some of the topics that keep her tweeting. You know, like her tattoos.

In the premiere episode, Richie visits a tattoo removal specialist to see about one of her more unfortunate inked choices — a tramp stamp in the shape of a cross that runs right down into her crack. Cringe! Looking laid-back and chic in boyfriend jeans and a sheer, leopard print shirt, Richie visits “Dr. Tattoff” to see what he can do.

In the waiting room, Richie remains personable with the rest of the ill-tatted waiters as they chat about their bad choices. But once she’s in the exam room, will she go through with removing her inked-on commitment? You’ll just have to watch to find out!

Do it all (like Nicole) with her laid-back routine >>

An added bonus to her show is that you don’t even need premium channels or cable to watch. All you need is internet access. Altogether, the show is made up of 20 webisodes hosted by AOL. A new episode will be available each week and you can check out all the remaining episodes each week at: on.aol.com/candidlynicole

If you weren’t already a Richie fan, we guarantee you’ll have a hard time not falling for her during the premiere. We can’t wait to see what she’ll be up to next!

Stay up to date on TV and your fave celebs by joining our newsletter! >>