Kristin Cavallari says she’s turning down work projects so she can stay in Chicago for her fiancé, Jay Cutler, and toddler son. 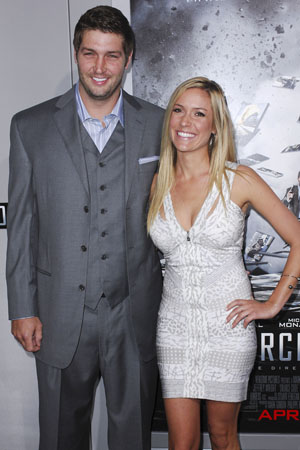 Kristin Cavallari might have a burgeoning fashion and television career, but she’s focused on only one thing right now: her life in Chicago with her growing family.

“I’ve passed on a couple of things that would have kept me here in L.A. because my fiancé Jay [Cutler] has to be in Chicago, so if I was here, we would never see each other,” Cavallari told Coco Eco magazine, referring to Cutler’s career as the Chicago Bears’ quarterback. “The sacrifices we make for love…”

Cavallari — who first started her reality television career on MTV’s Laguna Beach — added that she wants her planned summer wedding to Cutler to be her only one. The pair have a child together, 1-year-old Camden Jack.

“It’s easy to get wrapped up in your career and have that be your only focus, and I want my marriage to work and last — and family comes first,” she says. “The design work is great because I can do most of it from Chicago and I have so much fun with it. I love it and it all works out.”

We have to give it to Cavallari: It’s not easy for moms to balance both work and family — and sometimes it’s better to put the career in a lower gear for a while. Sure, it helps that both Cavallari and Cutler have plenty of cash, but women everywhere — without the big bank accounts — make the decision to stay home.

Our question: Is it fair that Cavallari has to give up work opportunities while Cutler continues doing what he loves? It might have something to do with his job in the NFL — football careers typically only last a few years, and his next job might take a backseat to her ambitions.

The most important thing? Cavallari is making the best choice for her family — and something tells us the opportunities will still be there when she decides to come back full-time.

Will I be single forever?
Is it ever OK to kiss and tell?
Does it matter if you’re more sexually experienced than him?