The 71-year-old domestic goddess is single and looking to mingle. And like everyone else you know, she’s looking online for Mr. Right. 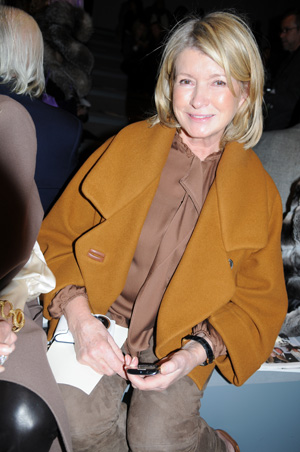 Martha Stewart is available. That’s what viewers learned on Monday, when the entertaining guru appeared on Today with Match.com chief executive Sam Yagan.

“Do you think I could possibly, maybe, find a match, like many of my employees?” Stewart asked Yagan, according to the New York Daily News.

“What we know we can get you is some great first dates. I think finding a soul mate for you might be a little bit difficult, but I think first dates are easily doable,” Yagan replied.

Wait, so what does that mean? Martha Stewart has no soul? She’s so difficult that no one would be her soul mate? That sounds weird, Sam Yagan. Wonder how you meant that.

Matt Lauer asked Stewart if she was looking for husband No. 2 (she has been divorced from former husband Andrew Stewart since 1990). Nah, said Martha. She just wants a friend with benefits.

Martha Stewart’s daughter reveals her dark side in new book >>

Stewart also added that she would be happy to use her real name on the site, but Yagan said that was a bad plan.

“It would be distracting to those initial conversations you have. Where everyone would be talking to Martha as opposed to really getting to know the person first,” he said.

The woman is rich, gorgeous, and smart as a whip, so surely she’ll find a man worth making a perfect French omelet for, right?