Amanda Knox steadfastly affirms her innocence in the murder of Meredith Kercher and talks to Diane Sawyer about her next battle with the Italian justice system. 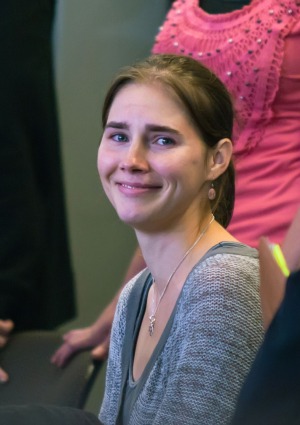 Her conviction was thrown out after four years in an Italian prison, but the war isn’t over for Amanda Knox. Facing a retrial for the murder of Meredith Kercher, “Foxy Knoxy” is steadfast in her innocence and won’t give up the fight.

In an interview with ABC’s Diane Sawyer, Knox explained her shock that the Italian Supreme Court did not uphold the appeals court ruling that set her free.

But she remains confident that the truth will keep her free. “If there needs to be a re-evaluation of looking into the facts, that’s fine,” she said. “Because facts are facts and I’m not afraid of them.”

Released from prison in 2011, it is unlikely she would be sent back to Italy if she were reconvicted, explained her lawyer Carlo Dalla Vedova. “There is a treaty about cooperation on extradition between America and Italy with the possibility to extradite a citizen, but an American citizen would be subject to authorization from the [United States] government.”

Celebrities give mixed reactions to the Amanda Knox verdict >>

Knox says she, too, wants answers — answers to why she and Raffaele Sollecito were made the scapegoats by Italian police and answers for the Kercher family.

Keep up with the legal wranglings of your favorite celebs — subscribe to the SheKnows Entertainment newsletter! >>