Bradley finally tells Norman the truth, breaking a little more than his heart and pushing him further into a psychotic meltdown. 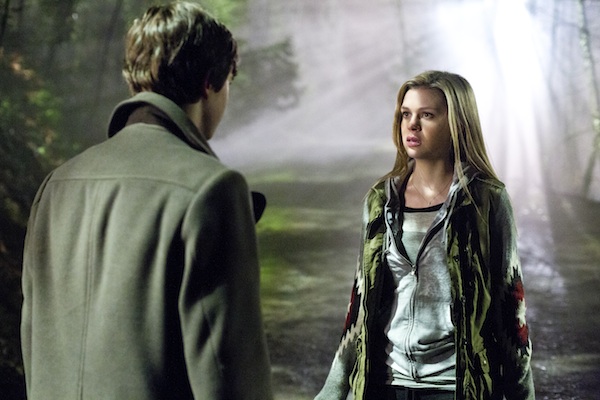 Norman Bates (Freddie Highmore) has spent a lot of time recently defending his relationship with Bradley, but no one else seems to think she’s as into him as he does. When Dylan (Max Thieriot) finally meets Bradley in person, he’s pretty surprised to find out she’s the girl he lost his v-card to. She’s way out of his league and probably a heck of a lot of trouble. In fact, he seems even a little concerned for his baby bro. But no one is more concerned than Mama Bates.

Emma makes a surprise visit to the Bates’s residence, but Norman refuses to see her. I can’t imagine why this guy has to be so mean to his gal pal, especially when he knows she digs him. But, maybe it’s because Bradley just showed back up at school and she put his head in a fog.

Norma (Vera Farmiga) spends some alone time with Emma to try to get some details about Bradley and the two sneak off together to stalk Bradley at yoga. Norma has flashes of the two in bed together and starts with that slight head twitch. The one she gets just before she’s about to ruin someone’s life. It’s surprising she didn’t bust down the door and strangle the girl with her own yoga mat right then.

Norma confronts Norman later that evening and scoffs at him when he says they’re in a relationship. This really pushes him to his limit. He marches straight to Bradley’s house and confesses his love to her in a really sweet, but very desperate, speech. Unfortunately, Bradley doesn’t feel the same way about him.

Norman leaves and starts to have a meltdown. He babbles on, repeating to himself the things his mother said about Bradley in a different voice. Very Psycho-esque behavior. Creepy. Then he watches his new dog get hit by a car. Something snapped in his brain that second for sure.

Also, there’s a strange man staying in room number nine who looks like he’s going to be causing a lot of trouble for Norman next week!