Oscar winner Jamie Foxx is circling Annie. The actor is being courted to play the pivotal role of Daddy Warbucks. His version of the character will have a new name and attitude. 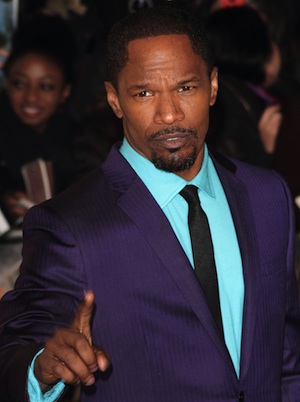 Last month, rumor had it that Justin Timberlake was in talks to join Annie. The singer, songwriter and actor was pegged to star as Daddy Warbucks.

The idea of the heartthrob as the famous orphan’s adoptive father was a head-scratcher. Not only is he too young for the part, but we couldn’t imagine him sporting Warbucks’ signature bald head.

Today, a likelier candidate has surfaced. According to The Hollywood Reporter, Jamie Foxx is eyeing the paternal role. The new Annie is being produced by Will Smith and Jay-Z with Quvenzhane Wallis (Beasts of the Southern Wild) as the title character.

In their version of the story, Daddy Warbucks will be Benjamin Stacks. It’s a variation on the name, but it’s essentially the same character. Sony Pictures has sent out an offer to Foxx, and they’re currently in negotiations.

The film will be directed by Will Gluck, who previously helmed Friends with Benefits and Easy A. Gluck also revised the Annie script, which was written by Emma Thompson and Aline Brosh McKenna.

Annie is expected to start filming this fall for a 2014 release date.

Do you think Foxx would be a good addition to the cast?