What is it about the Butterscotch Stallion that makes him such a stud? Is that he single-handedly made a broken nose and bed-head look sexy? Is it an incredible sense of humor delivered in a blonde-hair, blue-eyed package? Let us unwrap this riddle and explore why we are crushin’ on Owen… 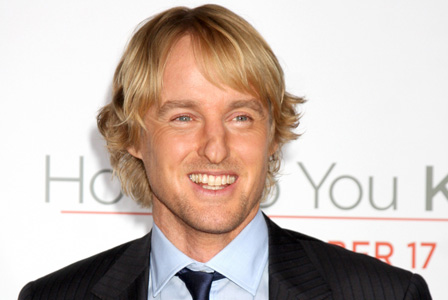 What is it about the Butterscotch Stallion that makes him such a stud? Is it that he single-handedly made a broken nose and bed-head look sexy? Is it an incredible sense of humor delivered in a blonde-hair, blue-eyed package?

You mean outside of the fact that he personifies SoCal hotness? We also love him because of the recyclable quotes he’s given us through comedic feats like Wedding Crashers; You, Me and Dupree; Shanghai Noon and Meet the Parents just to name a few.

One of the many reasons Owen Wilson trips our trigger is because he’s the class clown from high school who we secretly adored and wished would ask us out (even if our dad did threaten us within an inch of our lives if we accepted).

Owen started bucking the system when he got kicked out of St. Mark’s School of Texas for lifting his math teacher’s answer book. He told Dallas News, “Even though I was the worst geometry student, I was handing in extra credit — 50 lines of complicated theorems and proofs that I’d taken from the teacher’s edition.”

His folks were not impressed and sent Owen to the New Mexico Military Institute where the Butterscotch Stallion said he went from hanging out in Dallas with friends on a Friday night to someone “screaming at him to do pushups.” Owen partially blames his dad for his naughty tendencies. He told the Los Angeles Times, “One of my earliest memories was my dad sneaking us into the state fair, saying he was with the Channel 4 news. It was pretty clear where we got this from.”

And what’s the story behind that crooked nose that only Owen could make sexy? That is quite possibly one of the most well-guarded secrets in Hollywood. The consensus, neither confirmed nor denied by Owen Wilson, is that he broke it twice — once playing football and once in a fight.

Don’t you just love a man who can think on his feet? They don’t call it being a smart a** or wise a** for nothing. Your brain has to work fast to be funny. Owen takes this concept to an impressive level with his ability to improvise. Wilson is known for taking comedic liberties with scripts, and he and Vince Vaughn rehearsed improvisation for Wedding Crashers over games of ping pong and backgammon. How much would you have loved to be a fly on the wall for those?

Kind of makes a gal wonder — what other types of improvising skills does Owen possess? Hmmm…

None of Facebook’s relationship statuses quite fit Owen. He’s had a couple of high profile relationships — one with Sheryl Crow and an on again/off again relationship with Kate Hudson. Shortly after breaking up with Kate Hudson in 2007, Owen was rushed to the hospital after a suicide attempt. Thank heavens he failed! Where would Hollywood be without our favorite sexy funnyman?

In January 2011, Owen Wilson and then girlfriend Jade Duell became parents of a baby boy, Robert Ford Wilson. Mom and Dad later broke up, but Owen spends as much time with his son as possible. So until Facebook comes up with “Building a father/son relationship with son,” Owen’s status will have to remain “single.” Good news for all of Owen’s lovesick female fans!