In this exclusive interview, Brantley Gilbert talks to SheKnows about keeping in touch on the road, planning a wedding and his new puppy, Junior. 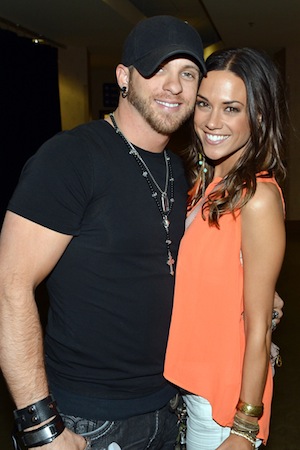 Brantley Gilbert has a busy 2013 in front of him. Currently on tour with Tim McGraw and Love and Theft, the 2013 ACM New Male Artist of the Year is also rumored to be releasing a new album sometime this fall.

As if time in a recording studio and a huge tour weren’t enough, earlier this year Gilbert proposed to his fiancé, One Tree Hill actress and country singer Jana Kramer. SheKnows had the chance to sit down with the small-town Georgia boy to talk love, marriage and kids.

SheKnows: Has being with Jana inspired and changed your music writing at all?

Brantley Gilbert: At first people thought she was bad for me, but what you see is what you get. Everybody’s told her that they haven’t seen anything but me working harder since we’ve been together. She’s definitely an inspiration and a motivation. She’s my best friend and my hardest critic. If I write something she doesn’t think is all that great, she’ll tell me.

SK: So how are you guys going to handle stuff with you on tour with Tim and Love and Theft?

BG: We’re on the phone 24/7 and on Skype. I’ve got a laptop and that’s pretty much all I use it for. We stay in contact these days. Even when we’re out of town, it’s like we’re right beside each other.

SK: Are you involved with the wedding planning?

BG: I am. I had three missions and I completed all three of them. I got the preacher, the wedding band and the fireworks. Now I got this mysterious email from the wedding planner that says, ‘Here’s a long list’ — and I want to stress long list — ‘of things that sometimes the groom helps with.’ I haven’t opened it yet. I’m pretending like I didn’t get it.

SK: That’s a good plan. Have you and Jana had to make any compromises about what your wedding is going to look like or what you guys are going to do?

BG: Compromises? I don’t think you understand. This wedding is a dictatorship. She wouldn’t let me have black roses or nothing. I thought she should wear a black wedding dress. You know, switch things up a little bit. No, I’m just kidding. Our idea of the wedding was pretty much the same. The only thing I wanted that I don’t think I’m going to get is riding away from the wedding on my Harley.

Brantley should check out our tips for stress-free wedding planning >>

SK: You guys dated, and moved in together and got engaged pretty fast, within about a year. Seems like you’re on the fast track. Do think you guys are going to talk about starting a family soon after you get married?

BG: Hey now! You’re moving faster than we are. Of course there’s been talk about it and eventually there will be more talk about it. I think right now we’re just having fun and she’s my best friend. I’m looking forward to the next step in my life with her. We’re going to roll with the punches and see where life leads us.

SK: Oh come on, you’ve got to tell me something!

SK: Oh, tell me about your puppy.

BG: His name’s Junior. He’s awesome. He was born on Valentine’s Day. I had to have a boy dog, like a man dog. I’ve got a Pit Bull in Georgia, but [Jana’s] terrified of Pit Bulls and she’s wanted a Boxer her whole life. So we found one and we got him and we found out he was born on Valentine’s Day, and the little son of a gun has a perfect little heart on his nose. It was crazy.

What do you think of Brantley’s wedding ideas? Black roses? Riding away on a Harley? Let us know in the comments.