Meredith Vieira wishes everyone would move on from torturing Matt Lauer, and she remains loyal to her pal. 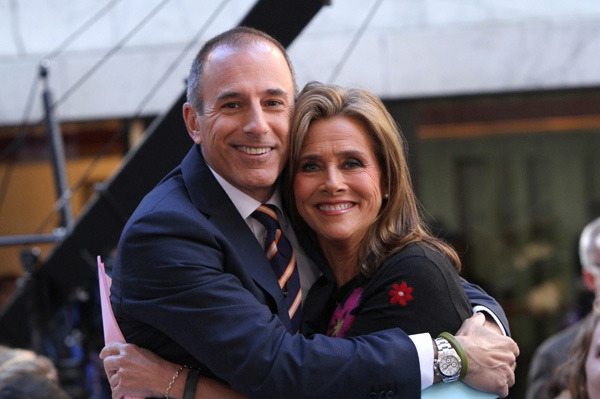 Say what you will about Matt Lauer: His co-workers, both current and ex, really seem to have his back.

Meredith Vieira, who left Today in 2011, said she has no plans to read Top of the Morning: Inside the Cutthroat World of Morning TV, the dishy tell-all tome written by reporter Brian Stelter, which was turned into a juicy story about Ann Curry’s ouster last week.

“I’m over it,” she told Page Six. “I’ve kind of been-there-done-that, and I don’t know what the interest is.”

It’s not that she means to be a snob, she says. It’s just that she’s taking it personally.

“I don’t want to get on a high horse, because I understand why people write it. I’m not trying to say he’s wrong to do it, but I look at it and it’s so personal to me. It’s my friends,” she said.

Vieira has remained notably connected to Today and NBC even after leaving the show. She’s been a special correspondent several times on the show, most notably for Queen Elizabeth’s Diamond Jubilee with Lauer in London. She’s also filled in for Kathie Lee Gifford on the fourth hour of Today.

So Matt’s a friend. And she’d love everyone to get off his case.

Page Six reports that Vieira said “Even if [NBC] blew it from a p.r. point of view, you’ve got to move on. I think what is happening to Matt is really wrong.”

NBC officials insist Lauer had nothing to do with Curry’s departure, yet the host has been publicly blamed for it. The scandal isn’t doing a thing to help ratings, apparently: After more than a decade as the top morning show, ABC’s Good Morning America is now ahead.