Miley Cyrus says that she and Liam Hemsworth are just as committed as ever — she just doesn’t want to talk about it anymore. 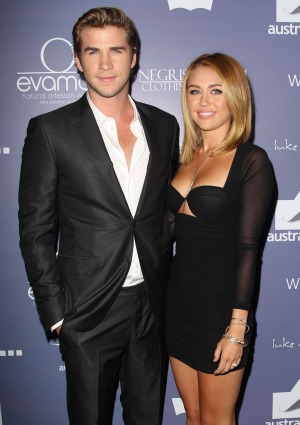 Are they on again or off again? The status of Miley Cyrus and Liam Hemsworth’s engagement has been the subject of much speculation since rumors started swirling he hooked up with January Jones, but the former Disney star says everything is just peachy and she doesn’t want to talk about it anymore.

In an interview with Elle UK, Cyrus said the couple just wants to keep their relationship private after divulging too much in the past.

Miley Cyrus gets a new tattoo >>

“We have a house together and dogs. It just seems right to be wearing this ring and to be committed,” the singer said.

“But we keep our relationship low-key and don’t talk about it anymore.”

“We were too nice to the world and gave them too much insight — into my life and my puppies and my house — and I just don’t feel they get that privilege anymore,” Cyrus explained.

“Like on my Twitter, I’m much more… not conservative, but you don’t see a picture of my dogs. You don’t get that personal stuff any more.”

One reason Cyrus is becoming a lot less personal is because she doesn’t know who to trust.

Follow all your fave celebrity couples by subscribing to the SheKnows Entertainment newsletter! >>

“People who grew up without either [money or fame] can get more of a culture shock and go the wrong way. ‘Oh my God, I have all this money! How can I spend it? All these people will like me because I’m famous!'” she said.

“I’ve always had people trying to be my friend for the wrong reasons.”

Read the complete interview with Miley Cyrus in the June issue of Elle UK, available on newsstands May 1, 2013.