After splitting from longtime amour and mother of his children Vanessa Paradis last year, the Lone Ranger star has rekindled a relationship with his The Rum Diary co-star Amber Heard. 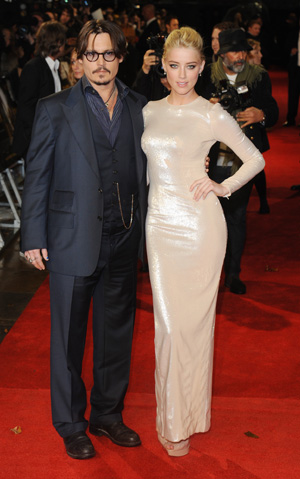 Public hand-holding: Now that’s a new stage in a relationship. And it’s a milestone Johnny Depp and formerly-ex-now-looks-like-current girlfriend Amber Heard reached over the weekend.

The New York Daily News ran a photo this morning of the pair backstage at the Rolling Stones concert in Hollywood Sunday night, making their way through a crowd with Depp leading Heard by the hand.

Depp is famously private about his love life, but did announce last June that after 14 years, things were terminé with model/actress Vanessa Paradis, with whom the Pirates of the Caribbean star has two children.

Heard and Depp met on the set of The Rum Diary back in 2009, Us Weekly reported in 2012, but “the duo didn’t become romantic until the film’s promotional tour in 2011, when Depp and French model-actress Paradis, 39, were already seriously estranged.”

At the time, the openly bisexual Heard had just split from her girlfriend, photographer Tasya van Ree. And so the newly single Depp and Heard found each other.

“They started sleeping together during the press tour,” a source told Us Weekly.

Later on, rumor had it they broke up, but the backstage PDA last night seems to indicate otherwise.

The romance has raised a few eyebrows due to the age disparity between the stars: Depp is 49 and Heard 26. Still, can’t be denied that the two look great together, right?