This Toronto-native trio-turned-foursome has quite the story to tell — one of ups and downs, rocky relationships and eventual growth and rebirth, with the latter evident in their new album “Birthmarks.” 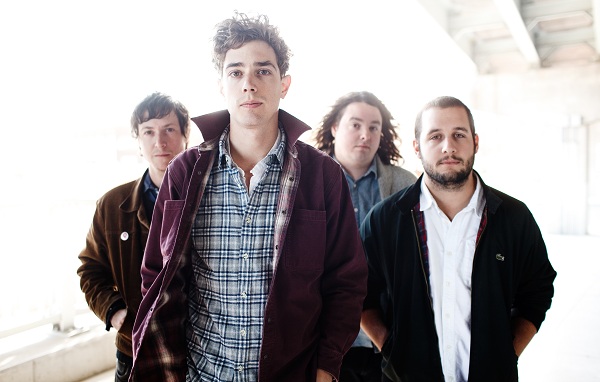 We all love a good comeback story — and Born Ruffians have just that.

It all began with their seemingly effortless debut album Red, Yellow & Blue, showcasing a pop-infused indie rock sound. (Their sickeningly sweet track “Little Garcon” was even featured in an American Express commercial.) Then many, if not all Born Ruffians fans collectively scratched their heads through the band’s disjointed second album Say It. Fans and critics wondered what was next — or if the band had called it quits.

And then they surprised us, resurfacing years later, seemingly renewed and refreshed. The proof is in the production of Born Ruffians’ polished and appropriately named album Birthmarks. It boasts a mature, confident sound, one that has taken music critics and fans by surprise — in a good way.

Iron and Wine embraces new sound in Ghost on Ghost >>

“This album is a new feeling and a new step for the band,” says frontman and guitarist Luke Lalonde. “It feels like a bit of a rebirth.”

“I think we’ve lost a bit of the balls-to-wall youth bravado we used to have,” he adds. “It’s impossible, as it is with most art or any career, to not become more analytical and focused as you progress. Birthmarks, to me, is just a reflection of that process.”

Paramore grows up with new album >>

In order to improve communication, which the band lacked before producing Say It, members Lalonde, Mitch DeRosier (bass), Steven Hamelin (drums) and Andy Lloyd (guitar/keyboard) revisited their Red, Yellow & Blue days and lived together again for a few months. The band spent a spring and a fall in 2011 isolated at a farmhouse in rural Ontario writing and creating demos. Three years later, Birthmarks arrived.

“We spent almost a year working on the recording of the album,” Lalonde says, “where we spent a mere two weeks recording Say It.”

“We didn’t feel locked in to recording the album as a band, as a live thing,” he adds. “We had the freedom to do it all in fragments and build it that way.”

Not only is the album well produced, but the lyrics have evolved as well, touching on infidelity (“Is it cheating if I call you sweetheart / Is it cheating if you call me your man?”), death (“I’m not scared to die / I’m scared to be replaced”) and disease (“Everything around me is covered in disease”), among other things.

According to Lalonde, who was only 14 or 15 at the inception of Born Ruffians, he says his life and how he interprets the world has influenced the lyrics for Birthmarks. In fact, Lalonde wrote constantly while traveling — from home and on tour, to areas all over the world, including Montreal, Australia, France and Germany.

“Some of it is under the guise of a fictional story,” he says, “but most of it comes from my own experiences and how I interact with the world.”

They may have taken a three-year hiatus, but better late than never. Welcome back, Born Ruffians!

A few of our other favorite tracks include “Permanent Hesitation,” “Cold Pop,” “So Slow” and “Dancing on the Edge of Our Graves.”