SDCP (and Peggy and Betty) embark on recovering from a “shameful, shameful day.” 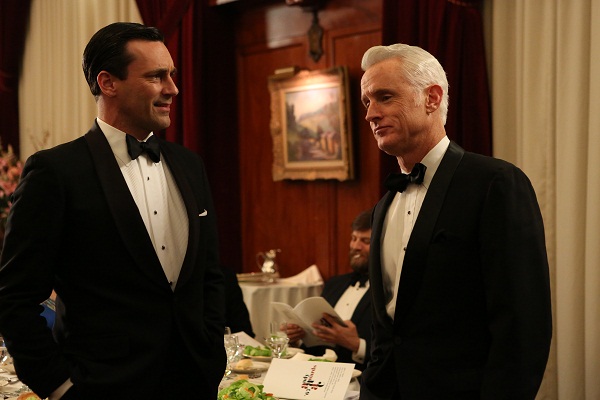 The title of the show this week, “The Flood,” was in reference to the biblical story Ginsberg’s father uses as a reminder. When Ginsberg came home from his date early and adamant that there won’t be another, his father reminded him that even on the ark, the animals came in pairs. In times of trials, you need someone to rely on. It was interesting to see who had someone and who didn’t. The pairings (or lack thereof) drove this episode.

The trial, in this case, was the assassination of Dr. Martin Luther King, Jr. In the aftermath, who would each person turn to for support? 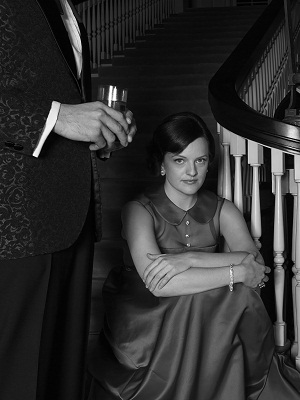 Peggy’s days had moments of both abandonment and commitment. From the start, when the announcement of King’s assassination was made at the ceremony, Abe immediately got on the phone with his editor and was soon on his way uptown. Peggy (Elisabeth Moss) needed to process what was happening (and a ride home), but he left her so he could scoop the story. It was Megan and Don who took her home. Later the next night, after a rollercoaster real estate ride (and eventually being outbid for the apartment), she gained better perspective on her relationship. Yes, Abe would occasionally run off to chase a story, and no, he hadn’t given much input into the apartment buying process (it’s not his money doing the buying). But with a little bit of pushing, he finally admitted to Peggy he didn’t see them raising “their kids” in that neighborhood. It’s not Stan Rizzo (like I want), but Peggy is finally getting what she wants. (Even if it’s not in the way her mother approves of.)

Pete (Vincent Kartheiser) also had something reaffirmed for him: Trudy won’t be taking him back. After the awful announcement, the first thing Pete did was call Trudy to check on her and their daughter. He offered to come out to the house and be with them, but Trudy (though kind) wouldn’t have it. She was fine without him and Pete Campbell was alone. The next day, though, for quite possibly the first time, we saw Pete affected by something. When Harry ranted about all the money lost as shows were canceled in favor of news coverage, Pete went ape on him. It was a “shameful, shameful day,” and for once, Pete wasn’t concerned with money. 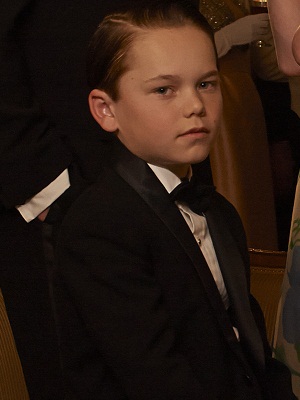 Speaking of going ape, the tragedy brought Don and Bobby closer together in an interesting pairing. Don has recently taken to “forgetting” to pick up his kids when it’s his weekend with them. However, after the assassination, Betty demanded he come for them. The next morning, the day after King’s assassination, Megan bundled up the kids to take them to a vigil in the park. Much to Sally’s dismay, Don was unaffected by the prior night’s event. When Bobby groaned of a tummy ache, Don opted to stay home with his son. Soon enough, the boys were at the movie theater watching Planet of the Apes.

Bobby, who was greatly ignored during the first few seasons, has really come into his own this season. And by “his own,” I mean he’s turning out to be exactly like his father. Bobby’s fascination with Sally’s friend’s violin case in a previous episode (because it “looked like a coffin”) was similar to his dad’s obsession with death. This week, Bobby got in trouble for peeling at the wallpaper in his bedroom after noticing the patterns weren’t aligned properly. Who else do we know that becomes destructive the minute things aren’t perfect? At the movies, unlike most kids, Bobby was actually affected by the ending of Planet of the Apes. As they waited around for the next viewing, we saw another great Bobby moment when he told the African American theater attendant that people go to the movies when they’re sad… his own way of telling the man he was sorry for (and hurt by) the loss of Dr. King, too. 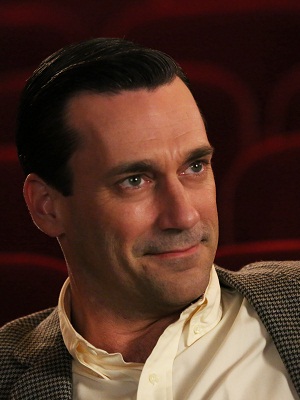 That moment later caused a gruesome moment of sincerity and shocking truth from Don. When Megan blamed him of turning to the bottle in times of strife instead of her, he told her an awful truth. He talked about not really loving his children, about not having any real emotional attachment to them. I don’t think that’s children-specific, though. I think that’s everyone. Don cares about people, but he’s just not wired to be emotionally attached. His rough life taught him otherwise. We learned that Bobby’s moment in the movie theater changed things for him, however. (At least with Bobby.) I think Don is starting to see the parts of him that Bobby has inherited… and the parts of Bobby that are far better. He’s learned to appreciate him.

That probably changed shortly after when Don went to check on Bobby and his son admitted he was afraid for Henry’s life.

While I’m on Henry: Even he had someone to turn to this week. After years of seeing Betty (January Jones) wrapped up mostly in herself, this week he saw her acting like a mom and a wife. Instead of letting her children obsess over the King assassination (like she allowed with JFK), she actually sheltered them. Later, she showed support for her husband when he decided he wanted to take the next step in his career. Yes, we also saw her eyeing her old, small-sized dress in the mirror and fretting over her new, plumper look. However, I prefer to think of it as just making sure she looks her best in order to help her husband’s future campaign.

Altogether, it made for an interesting episode. I’m in love with the new attention they’re paying to Bobby and I’m interested to see in what ways he’s more like his father and in what ways he overcomes Don’s lack of emotion. I also appreciate any episode that doesn’t focus so much on Megan. 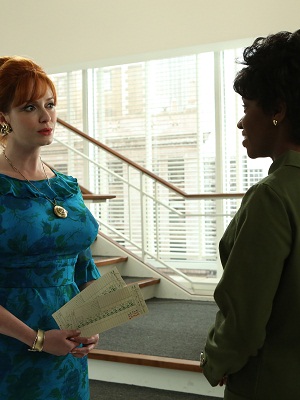 Mostly, I appreciated the treatment of such a historic and emotional American event. Dr. King’s life and his assassination helped shape the America we live in today and it was cool to witness the more immediate effects his life and death had. I also enjoyed seeing both Dawn and Peggy’s secretaries return to work. Was it safer in those big offices versus the neighborhoods where they lived? Probably. But it also showed solidarity to the cause. They could have stayed home and mourned. No one would have faulted them. But they knew the white people would be at work and if they wanted to be treated the same, they needed to act the same and show up for work as well.

Best part: The moment with Joan and Dawn. Joan seemed more annoyed than anything when Dawn showed up. My guess is that Joan had already called in a sub for the day, expecting the secretary to take the day off. Then, when she awkwardly hugged Dawn, it was a rare moment where Joan tried to be a caring woman while at work. Both Don and Dawn seemed confused by the gesture, simply because it was so rare (and so stiff). But it was still so great.

Subscribe to our newsletter for more Mad Men news >>

Did they treat the assassination and subsequent reactions properly? How did Don’s confession make you feel?