On this episode of Once Upon a Time, called “The Evil Queen,” Hook returns to Storybrooke, Emma discovers that Tamara may not be who she seems, and Regina learns some harsh truths both in the present and in the past. 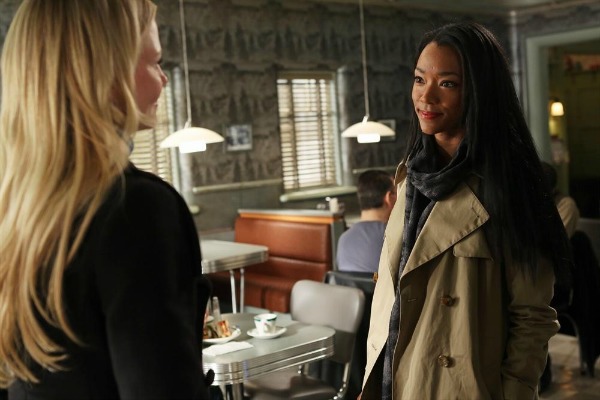 How happy was everyone to see Hook (Colin O’Donoghue) back in this episode? I know he’s inherently naughty, but I just can’t help but love him. I thought it was pretty clever of him to fool Regina into thinking that he was betraying Tamara (Sonequa Martin-Green) and Greg (Ethan Embry) for her, only to find out he was actually betraying Regina. Considering the fact that she betrayed him too and threw him to Maleficent, I’d say they were even.

Once Upon a Time “Lacey” recap: Darkness reigns again >>

Tamara and Greg having that little cuff thing that takes away magic is quite diabolical and it definitely makes me nervous. That’s a pretty heavy power for them to have and I’m sure it’s going to spell bad news for all of our heroes in Storybrooke. I wonder what’s going to happen when Neal (Michael Raymond-James) catches on to the fact that his fiancee has been lying to him all along. Henry (Jared Gilmore) got excited by the prospect of his parents getting back together, but is that even possible after all this time? I do have to admit that I like Emma (Jennifer Morrison) and Neal’s chemistry together though. I guess we’ll just have to wait and see if anything rekindles between them.

Once again, I enjoyed the little jaunt back in the Enchanted Forest. There was never any doubt that Regina wasn’t going to suddenly change after getting rescued by Snow White. But it was still kind of interesting to see those two interacting in such a way that allowed Regina to learn what Snow really thought of her. Too bad Regina’s evil tendencies got in the way of them ever having a chance at reconciliation.

Want to get updates about Once Upon a Time and other TV shows sent directly to your inbox? Sign up for our SheKnows newsletter! >>

“Actually I prefer with the lights on.” — Why does that not surprise me in the least?

“You did just slaughter an entire village. Maybe that’s why they call you Evil Queen.” — The way he said “Evil Queen” was hilarious.

“Well, in that outfit, finding her should be easy.”

Henry pointing out to Regina that he could never love her if she did such horrible things. Too bad she erased his memory before he could tell anyone.

Regina finding the villagers playing a game at her expense. Was she truly surprised by that? Really?

Regina getting blamed for making fun of the queen. Haha!

Emma finding Tamara’s list of people and their fairytale names.

Not being able to help the laugh that escaped me when Tamara assured Emma that she could be trusted.

Emma trying to convince Mary Margaret that Tamara was the “she” that August was trying to warn them about.

Henry informing Emma that Operation Cobra was back on. That young man certainly belongs in that family. 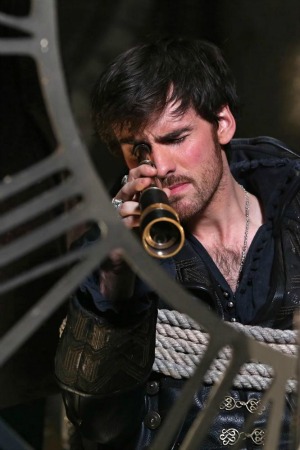 “You ever wonder if this constant pursuit for revenge is the reason no one cares for us?”

Hook realizing that, once the Crocodile was dead, he would have nothing left to look forward to.

Hook and Regina arguing over who her mother liked more. Hm, why do I suspect that something is up with that cuff?

“Maleficent, love you in earth tones.”

Snow telling “Wilma” about the day she met Regina.

“What happened to her? This stranger?”
“She’s gone. But I hope she comes back someday.”

Emma and Henry on their stakeout. Too cute.

Henry figuring out that there was a way to get back to the Enchanted Forest. Wow, that kid is smart.

Emma coaching Henry on how to be a good lookout.

Regina using her anonymity to find out what Snow White really thought of her. The good and the bad.

Snow figuring out that she was talking to Regina.

“Nobody steals from a dwarf.”

“I said you could call. Didn’t say I would answer.”

“The Queen is dead. Long live the Evil Queen.”

Aha! I knew that cuff was fishy.

What did you think of this episode of Once Upon a Time? Do you think they will ever find the beans and make it back to the Enchanted Forest? What do you think Greg and Tamara’s ultimate plans are?