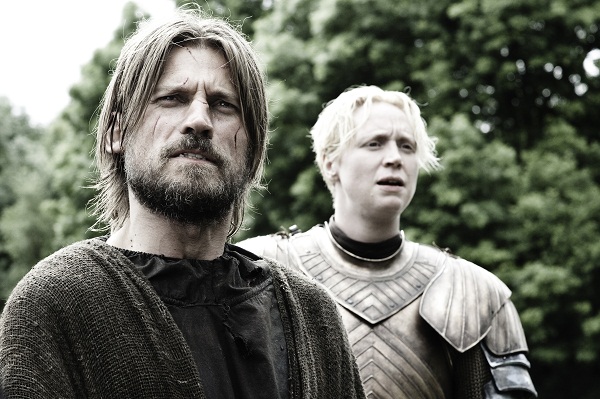 It was a pretty awful week for the Game of Thrones players. Hardly anyone had much luck… except Jon Snow. Jon Snow got lucky.

Arya Stark had a rough time of things this week. We witnessed one epic swordfight between the Hound and Arya’s friend/hostage-taker, Lord Beric Dondarrion. For a brief moment, it appeared the Hound had slain Beric and that Arya would see the Hound murdered by the Brotherhood without Banners. She’s still pissed that Hound killed the butcher’s son, Micah, after he was caught play sword-fighting with Arya. Beric is brought back to life (for the sixth time, she later learns), though. He’s a just man, so he won’t have the Hound punished for something he didn’t actually do. Meanwhile, Arya also learns that her blacksmith buddy (and possible son of former King Robert Baratheon), Gendry, has chosen to stay on with the Brotherhood… abandoning her on her quest to find revenge (and home). Poor Arya. I’m fairly certain she’s a bit keen on him. 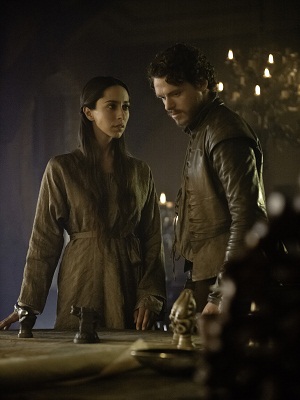 Robb found accidental trouble when Karstark and a few others took it upon themselves to murder the two small Lannister hostages they’d previously captured. It leaves Robb furious, and rightly so. However, his new wife (and a few others) tried to explain to Robb that if he executed Karstark for his crimes, his men would leave, refusing to help with Robb’s war. Robb is supremely stubborn, though, and beheaded Karstark, driving all of his men (half of Robb’s army) back home. Jeyne really had to bite back the “I told you so.” His new plan? Return to Twins… where he’d previously promised to marry someone. This cannot possibly end well.

None of the Lannister “kids” got off easy this week, either. Even Tywin’s precious Cersei (Lena Headey) was put in an awful position.

Outside King’s Landing, Jaime’s handless arm became severely infected. When he and Brienne finally found themselves on somewhat friendly territory, a medic tried to aid him. Jaime refused the help of poppies as the doctor soldered off the rotting flesh. Poor Kingslayer.

Back at the castle, Tywin was not only cruel to Tyrion (Peter Dinklage) (as always) but also Cersei. The Lannisters learned that Margaery (Natalie Dormer) is trying to marry her brother and Sansa. If that were to happen, Sansa would leave King’s Landing for High Garden and the Lannisters would lose the one thing they have over the Starks. How will they fix this? Tywin decided that Tyrion should marry Sansa and that Cersei should marry Margaery’s brother, Loras (whom everyone seems to know is gay… except Sansa and possibly Margaery). The siblings pleaded for a different solution, but Tywin’s mind is made up and we’ve once again witnessed that the Lannisters’ conniving ways run deeper than just the siblings.

On the up side… 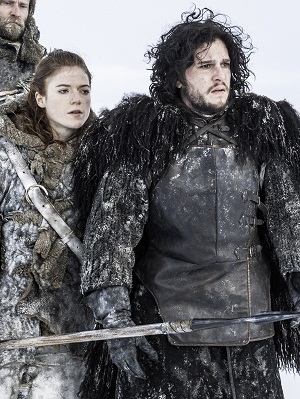 — Jon Snow finally shed all those layers! Ygritte asked him to prove he’d really left his pledge to the Night’s Watch behind. How? By disregarding his vow of chastity and sleeping with her in a cave. I’m not entirely certain we should trust Ygritte… but it’s hard not to root for them. They’re precious together. And who doesn’t want The Bastard to be happy?

— Khaleesi’s army is a loyal one. Despite setting her Unsullied army “free,” they continue to remain loyal to her. They’re forever grateful of her purchase of them. I love the entire Stark family, but I think Khaleesi is perfect for the Iron Throne… her army’s loyalty only makes it more obvious.

— Last we saw of Jaime, he had fainted during a bath. Presuming he’s still alive, he’ll once again be clean and pretty for next week. Don’t get me wrong… the grunge from a hard fight is always mighty attractive. There’s a line between “hard-fought” and “hobo,” though, and Jaime’s been far past that line for weeks now.

— I really want Tyrion to be happy and marry Shae. So, of course I hate Tywin’s grand scheme to keep Sansa at King’s Landing. That said: It’s always fun to see Cersei not get her way.

What did you think? Are you leery of the Tyrells? Rooting for The Imp? Go ahead and disagree: No beheadings here.