Two and a Half Men takes a licking and keeps on ticking. The CBS sitcom is currently in its 10th season, with more to come. The network’s renewed the show for another year. 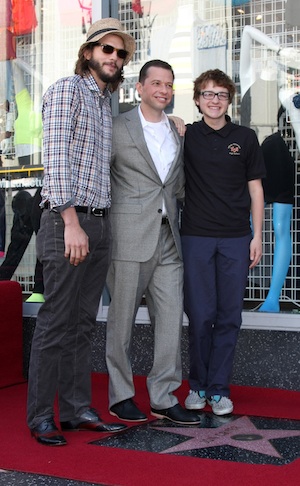 Friday’s been a big day for TV news. Three networks have announced renewals for the upcoming fall season. NBC, The CW and CBS have revealed the fate of major shows, one of the most anticipated being CBS’ Two and a Half Men.

Ashton Kutcher’s cruddy new Two and a Half Men deal >>

According to The Hollywood Reporter, the long-running sitcom will be back for Season 11. Stars Jon Cryer and Ashton Kutcher are set to return, while Angus T. Jones is up for debate.

Jones’ status has been reduced. He won’t be back as a series regular; instead, he’ll appear as a recurring guest star. We’re not sure why his role was shortened, but it may have something to do with the anti–Two and a Half Men rant he gave last year. You know the one where he called the show “filth”?

Angus T. Jones says sorry for calling Two and a Half Men “filth” >>

Back to Kutcher and Cryer: Their new deals are short-term — only for one year each. That makes sense, considering the show’s popularity is winding down. With the “half man” missing in action, we wonder what angle the new season will take?

Two and a Half Men joins previously renewed comedies 2 Broke Girls, Mike and Molly, The Big Bang Theory and How I Met Your Mother. The latter is returning for its ninth and final season.

Do you still watch Two and a Half Men?