This has been quite a week for Iron Man 3 star Gwyneth Paltrow. She shares even more information about that sheer dress and her bikini line on The Ellen DeGeneres Show on Friday. 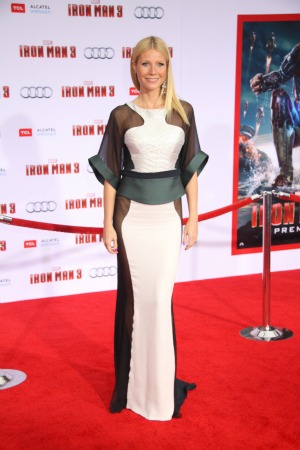 The proclaimed “World’s Most Beautiful Woman” has a bushy bikini line? Yes, that is exactly what Gwyneth Paltrow told Ellen DeGeneres on her show on Friday.

The much-talked-about dress from the red carpet of the Iron Man 3 premiere was pretty sheer. Whether you love or hate the dress, it is pretty clear that undergarments were not a high priority for the dress designer.

DeGeneres started right into the topic, saying, “Just appears you don’t see anything in the area where you’d see…”

That’s when Paltrow jumped in with “underwear?”

She continued, “I kind of had a disaster. I was doing a show and I changed there, and I went and I couldn’t wear underwear. I don’t think I can tell this story on TV. Well, let’s just say everyone went scrambling for a razor and so I went from being the most beautiful to the most humiliated in one day.”

The studio audience laughed heartily while the talk-show host did her best to keep a straight face.

DeGeneres replied, “Oy. It was just the side of your leg… What is going on with you?”

The Iron Man 3 star was able to avoid any fashion disasters with a good old-fashioned razor and a good sense of humor.

Paltrow has been quite the media sensation this week, going from People‘s “Most Beautiful” to being criticized for selling string bikinis for little girls on her site, goop.

Whatever the mom of two is doing, the public loves to loathe or worship her every move. You might not like her red-carpet dress, but we are all still talking about it days later.

Watch Gwyneth Paltrow talk about her bikini line on The Ellen DeGeneres Show.