Country singer Jason Aldean and his wife Jessica Ussery have split after 11 years of marriage. Many insiders saw this coming after Aldean’s cheating scandal last fall. 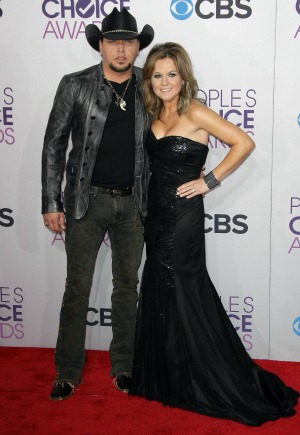 There’s probably a country song somewhere in this, but for now, it’s reality. Country singer Jason Aldean and his wife Jessica Ussery have split. Us Weekly announced the news on Thursday and to many insiders and fans, the separation isn’t shocking.

Many people remember Aldean’s public indiscretion with former American Idol contestant Brittany Kerr outside a Los Angeles bar back in the fall of 2012. The makeout session was caught by TMZ cameras and apologies from both involved parties soon followed.

However, it was Ussery who had to deal with the fallout from that public kiss.

A source told Us Weekly, “There were obvious problems before the bar kiss, but he finally left earlier this year.”

The split reportedly occurred back in January and Aldean’s wife was not by his side at the recent ACM Awards in early April.

A spokesperson for Aldean told TMZ, “I can confirm that Jason and his wife are having problems, but there is nothing more to share at this time. It’s a private family matter, and we hope everyone will respect that he would like to keep it that way.”

Music review: Jason Aldean’s “The Only Way I Know” >>

The couple, who have been together since high school, might be trying to work things out since the country singer’s rep only acknowledged the fact that there are issues in the marriage versus confirming the end to their marriage.

In the past, the duo has stuck it out together publicly.

Aldean said after the scandal to Us Weekly, “Our lives got turned upside down, and it’s been a learning process. When there’s kids involved, that’s something you’ve always got to try and protect.”

ACM Awards: Match the cowboy to the hat >>

The couple’s children, daughters Keeley and Kendyl, remain a priority in their lives. After decades together and 11 years of marriage, perhaps the two will work it out.

As Aldean told CBS This Morning in November, “We’ve been together for a long time and through a lot of things together. Those are things that most people get to deal with in private, but we didn’t have the luxury of doing that.”