Model Kylie Bisutti says her days with Victoria’s Secret left her feeling worthless, but the international brand says its part in her new book is mostly fiction. 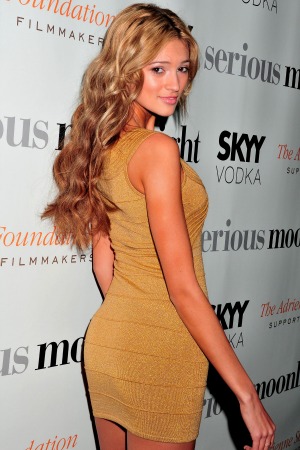 Former model Kylie Bisutti’s new book I’m No Angel details her days as “a piece of meat” working for Victoria’s Secret, but the lingerie purveyor says the memoir is largely a work of fiction.

In the book, Bisutti — who nabbed her gig with Victoria’s Secret through an online model search in 2009 — says the fashion industry, and Victoria’s Secret more specifically, butted heads with her strong Christian beliefs.

“That’s when it hit me. I was being paid to strip down and pose provocatively to titillate men. It wasn’t about modeling clothes anymore; I felt like a piece of meat,” Bisutti wrote in an excerpt obtained by the New York Post. “The next day, I broke down and started sobbing. I was in my bedroom and dropped to my knees and started to pray. ‘God, why did you have me win the Victoria’s Secret Angel competition if it was going to make me feel this way? I’m not honoring my husband. I just want answers!'”

She claims she quit her gig as a Victoria’s Secret Angel to honor her husband and live a quiet life in Montana, giving up a multimillion-dollar deal.

Not so fast, says Victoria’s Secret. Not only do they take offense to Bisutti’s description of the job, but they say she is flat-out lying about the depth of her association with the brand — namely, that she was never an Angel despite her begging them for work.

“Ms. Bisutti has made numerous fabrications and misstatements of fact regarding her brief association with Victoria’s Secret,” the company said in a statement. “In 2009, Ms. Bisutti won an online amateur modeling competition and hasn’t worked for us since that year. The prize for the winning contestant was the unique opportunity to a one-time walk in the 2009 Victoria’s Secret Fashion Show.”

Catch all the juiciest celeb memoirs in the SheKnows Entertainment newsletter! >>

I’m No Angel: From Victoria’s Secret Model to Role Model hits bookstores on May 14, 2013.