Celine Dion told Katie Couric on yesterday’s Katie that her son looks better in heels than she does. Judgmental internet gossip-watchers cluck and snort. 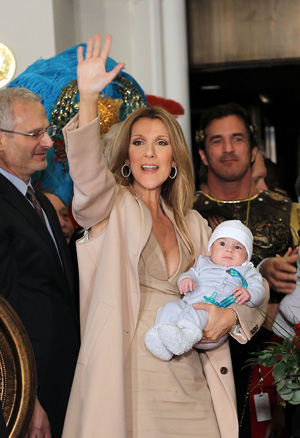 Lots of kids like to dress up in mom’s shoes. And Celine Dion has no problem letting her young son, Nelson, do the same.

He’s “2½ and he looks better in heels than me,” Dion told Katie Couric on Katie, as a picture of adorable Nelson in a plaid blazer, gray pants, and oversized 3-inch black pumps flashed onscreen.

Couric looked a little uncomfortable, so Dion added, “I don’t know how he does it, but I’m not the only one in this family who loves shoes, believe me.”

Kate Winslet: My barf will go on >>

The audience, who had just heard from Dion that she’s a certified shoe addict who owns more than 3,000 pairs, laughed as Couric raised her eyebrows.

“Um, yeah,” Dion said. “Stay tuned. What happens in Vegas stays in Vegas!” (Dion is currently in residency at Caesars Palace in Las Vegas, where she will perform through 2019).

But the internet, which has judgment for all things, wasn’t crazy about Dion’s revelation. “Give this kid a fighting chance not to get his a** kicked when the teacher (no matter how well-meaning he or she is and how much he or she tries to educate this kid’s classmates on tolerance) turns his or her back,” said one Gawker commenter, summing up many of the comments Dion’s revelation garnered.

Does Dion care? Since most small kids love to clomp around in parental shoes, with both boys and girls likely to pick the shoes of either Mom or Dad, probably not.

Besides, Dion clearly doesn’t care what the general public thinks about her parenting decisions, since she let now 12-year-old son, Rene-Charles, grow out his hair until it reached his waist.

Practically every time an image of Dion and Rene-Charles was published, hysterical commenters would shrill that he looked like a little girl (so?) and that the long hair was going to, gasp, turn him gay.

Rene-Charles finally cut his hair when he was 8 years old because of the regulations at his school. Dion handed down an edict: Change schools or cut your hair.

Gotta say, the lady sounds like a cool mom.