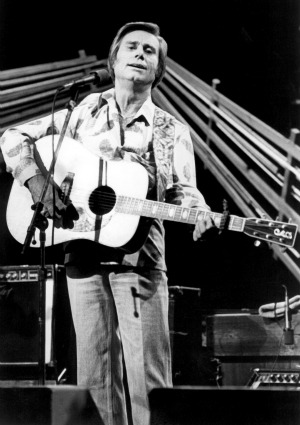 Country music legend George Jones is dead after falling ill in the middle of what he said would be his last tour. He was 81 years old.

Jones’ publicist confirmed the news in a statement, saying, “Today is a sad day for music. George said to me once, ‘One day I’ll join the Angel band.’ Well, today he did.”

“George passed with his family by his side and the official cause of death is being listed as ‘Hypoxic Respiratory Failure.'”

A family member explained to TMZ, “He has been on oxygen for a long while now and his lungs finally just couldn’t do it anymore and they collapsed and he passed away. He couldn’t breathe anymore on his own.”

Jones was hospitalized on April 18 after suffering a fever and irregular blood pressure while in the middle of his tour, causing several dates to be canceled.

The mark of George Jones on country music cannot be discounted. His songs spent more time on the charts than any other artist — about 150 tunes — but his tempestuous personal life often eclipsed his career.

Luke Bryan gets emotional at the 2013 ACM Awards >>

Married four times, once to fellow star Tammy Wynette, his rocky relationships, hard drinking, and violent rages made headlines more often than his music. The status of his marriage to Wynette often played out in songs like “We Can Make It” and “Loving You Can Never Be Better.” Even after their divorce in 1975, the pair continued to sing together until Wynette’s death in 1998.

But despite his reputation, the singer — who earned the nickname “No-Show Jones” for his habit of getting drunk and missing gigs — achieved sobriety in the last 10 years of his life.

Included in the many awards and honors Jones earned during his lengthy career are a Grammy Lifetime Achievement Award, Induction into the Grand Ol’ Opry and Country Music Hall of Fame, and being named as a Kennedy Center Honoree.

Jones leaves behind his fourth wife and manager, Nancy Sepulvado, as well as four children from his first three marriages.

Stay up to the minute with all your favorite country music stars — subscribe to the SheKnows Entertainment newsletter! >>