SheKnows correspondent Whitney English chats with Diane Keaton about the bevy of big-time stars in The Big Wedding and why she thinks Susan Sarandon is one hot mama. 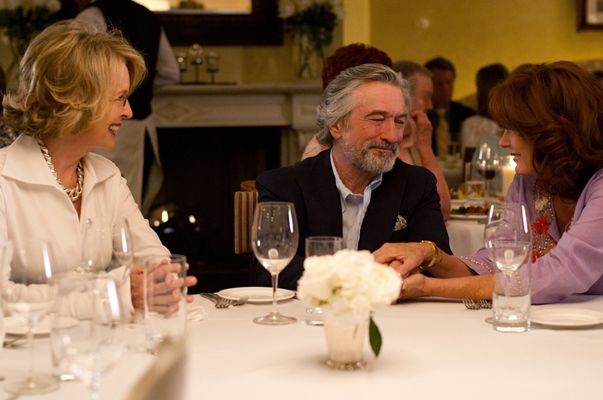 A Diane Keaton, Robert De Niro and Susan Sarandon love triangle? You’ll have to see it to believe it!

The three A-list actors provide countless laughs in the romantic comedy The Big Wedding where the over-50 stars are the ones with all the steamy scenes.

Watch our interview with Diane

“Susan Sarandon is very sexy,” Keaton told SheKnows recently at the film’s press day in Los Angeles. “And she’s still sexy. She’s very alluring, and she’s very smart, and she asks very brilliant questions. To be with her was fantastic. She’s genius. She’s a great actress.”

Lofty praise! But Keaton had nice things to say about all her co-stars. And she told us filming was almost as crazy as the movie itself.

“It was pandemonium,” she laughed. “It was insane. We were all in this one house… and everybody was coming and going and they all have these big lives… It was kind of like the movie — in a way.”

As for her co-star De Niro, Keaton said she was excited to finally get to work with him.

This is the third wedding-related movie for Keaton, and it’s the closest she says she’ll ever get to being in a real one.

“I don’t go to weddings,” said Keaton. “I’ve made three wedding movies that feature weddings… and I’m not a married person — count me out… This is good enough for me.”

Be sure to catch Diane Keaton and the rest of the cast in The Big Wedding, in theaters today.