Troy and Abed pull a Freaky Friday switch so Troy can run from what he knows he has to do: break up with Britta. 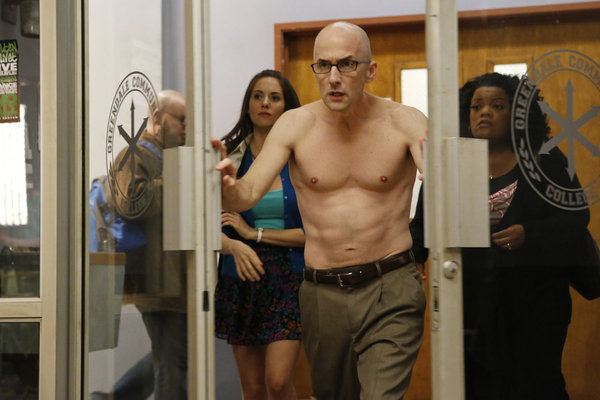 One thing can definitely be said about Troy (Donald Glover) and Abed (Danny Pudi): Those BFFs sure know how to commit to a bit. But on tonight’s episode, “Basic Human Anatomy” (written by Jim Rash), the duo may have taken it too far.

In honor of their anniversary, Troy and Abed pretend to switch bodies. Surprisingly, Donald Glover does a much better Abed impersonation than Danny Pudi does of Troy. Donald completely had the wide-eyed, glossed-over look with lizard neck and finger twitches down, while Danny’s impersonation lacked, well, commitment.

While pretending to be the other person, Abed takes Britta to lunch for “their anniversary” and begins to tell her all the problems they are having in their relationship. Eventually, he breaks up with her for Troy. Is there a more humiliating way to get dumped?

Meanwhile, Troy (as Abed) confesses everything to Jeff (Joel McHale). Jeff actually sympathizes with him and tells him it’s not his fault that things didn’t work out. He wishes he was able to commit to anything the way Troy’s been able to commit to Britta for a year. But, now it’s time for him to man up and tell Britta how he really feels.

In the end, Troy and Abed switch back, and Troy does tell Britta to her face that he thinks they are better off as friends. The two seemed sad but like they might be able to stay friends. We’ll keep our fingers crossed.

Also, Dean Pelton tried to switch bodies with Jeff, which just made him do a lot of push-ups, be mean to everyone and run around with his shirt off. Oh, and also say, “When Jeff was inside me…,” an obscene number of times. So, he got to live out one of his fantasies — almost.