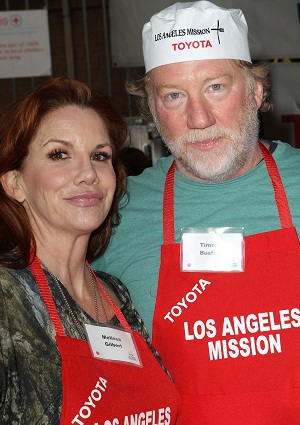 Talk about a whirlwind romance! Just a year ago, Dancing with the Stars alum Melissa Gilbert was thanking her wonderful boyfriend, Thierry Gauchet, for supporting her after she was seriously injured on DWTS. Now, she’s married to Thirtysomething and West Wing star Timothy Busfield.

There’s no word on when or how the two officially started dating, but a rep told People that the couple got engaged over the 2012 holidays. Four months later, her rep confirmed that Gilbert (who first stole hearts as Laura Ingalls on Little House on the Prairie) and Busfield married “in a private ceremony at San Ysidro Ranch in Santa Barbara.”

No white for this bride, though. This is Gilbert’s third wedding, so she opted for a gorgeous red gown. She was previously married to Bo Brinkman (Gettysburg and Gods and Generals) and Bruce Boxleitner (Tron, Babylon 5 and also Gods and Generals) and is the mother of two children. Busfield has also been married twice before, to actress and director Radha Delamarter (The Night Before Christmas) and then to fashion designer Jennifer Merwin. Busfield is the father of three.

Gilbert and Busfield’s wedding destination is one very popular location. San Ysidro Ranch has hosted a number of celebrity weddings and events. Gwyneth Paltrow and Coldplay’s Chris Martin were married there in a super secret wedding in 2003. It called out to fellow rocker Caleb Followill and his bride, Lily Aldridge, for their 2011 nuptials, as well. Meanwhile, Drew Barrymore used it for her rehearsal dinner. Hilary Duff and her new hubby, Mike Comrie, stayed at the ranch on their wedding night. And future president John F. Kennedy and Jackie Kennedy even spent their honeymoon there. How romantic! It sounds like the perfect spot to say, “I do.”

We’re wishing the lovely new couple all the best!

To keep up on all celebrity weddings and engagements, join our newsletter >>